Apple has just finished its Far Out event on September 7, and it started it in a very exciting way: with the reveal of the Apple Watch Series 8! This time, the company focused on 3 lines, SE, regular and Ultra, each of which serves a different market, depending on its economic possibilities.

The Apple Watch Series 8 has several interesting new features. First of all it has a new temperature sensor, which can help detect health patterns. This is especially useful for women who are on their period or in ovulation, because there is a new and improved function that helps them keep track.

Moreover, there are also 2 new sensors, whose function is to help detect car crashes. If the sensors detect that you were going at a high speed and you suddenly stop, they will automatically call your emergency numbers, unless you cancel quickly because it was a mistake.

Another great improvement is the autonomy, because the smartwatch can last up to 18 continuous hours, or up to 36 thanks to its new low energy consumption mode. This mode cancels the exercise self-tracking and the display is always on, although the shock detection will always remain active. 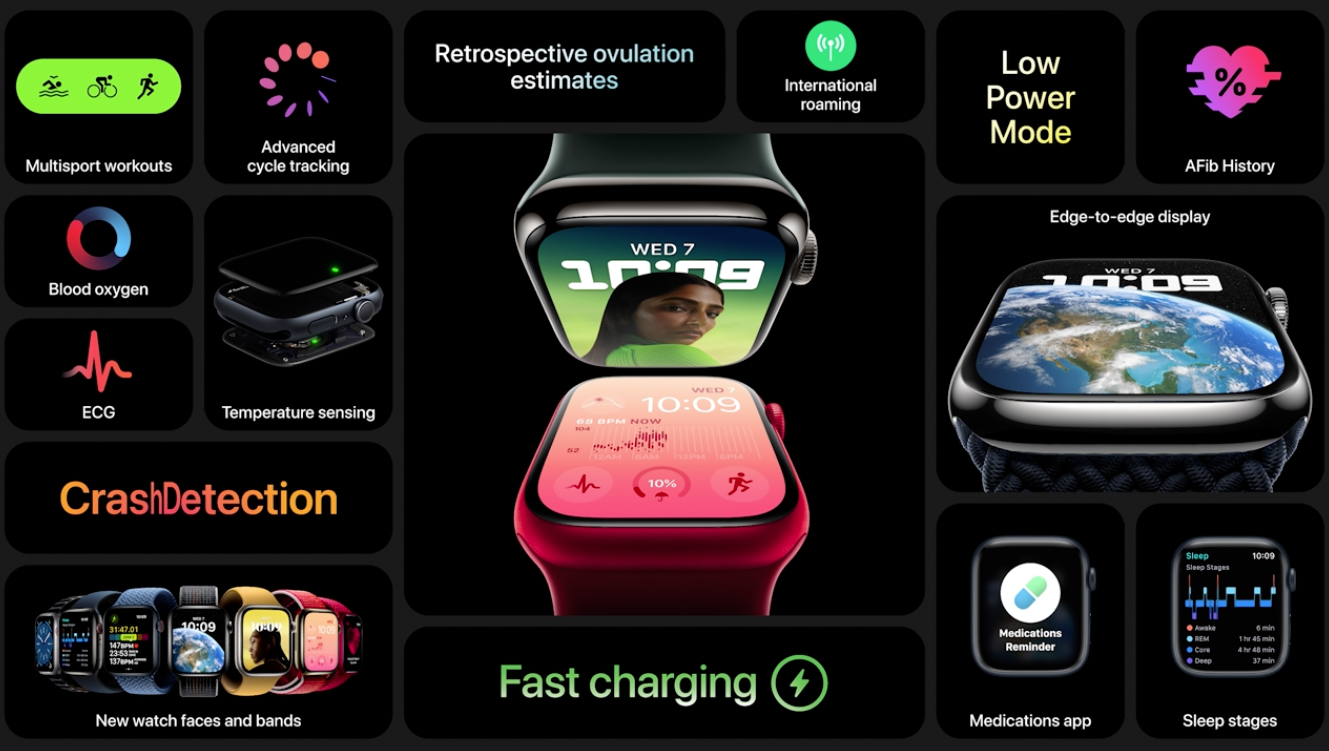 Finally, the Apple Watch 8 has roaming, charges faster, has slight design changes and is more durable. You can buy it in midnight, starlight, silver and red colors for the aluminum model; and in silver, gold and graphite for the stainless steel model.

The Apple Watch Series 8 will cost $ 399 USD for the GPS version and $ 499 USD for the version with mobile data; and it will begin to be distributed this September 16. 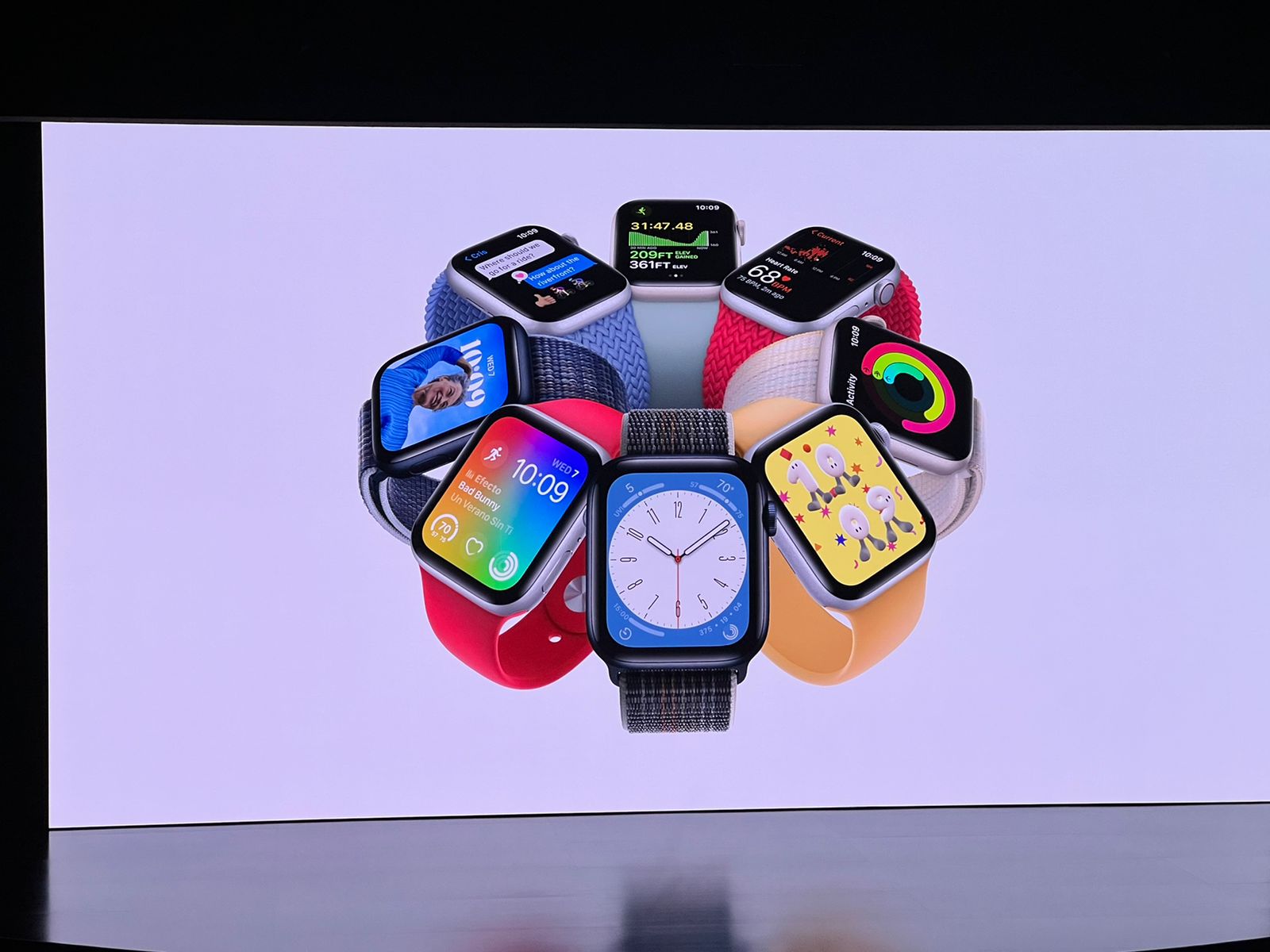 The Apple Watch Series 8 SE will be the cheap version of the new smartwatch, which loses some important qualities such as the always-on display or the temperature sensor, but is considerably less expensive.

The watch will include the new chipset of its older brother, which makes it 20% faster than the original SE, and also has a 30% larger screen.

The Apple Watch Series 8 SE will be available in silver, midnight and starlight colors. In addition, it will cost $ 249 USD for the GPS version and $ 299 USD for the version with mobile data; and it will begin to be distributed this September 16. 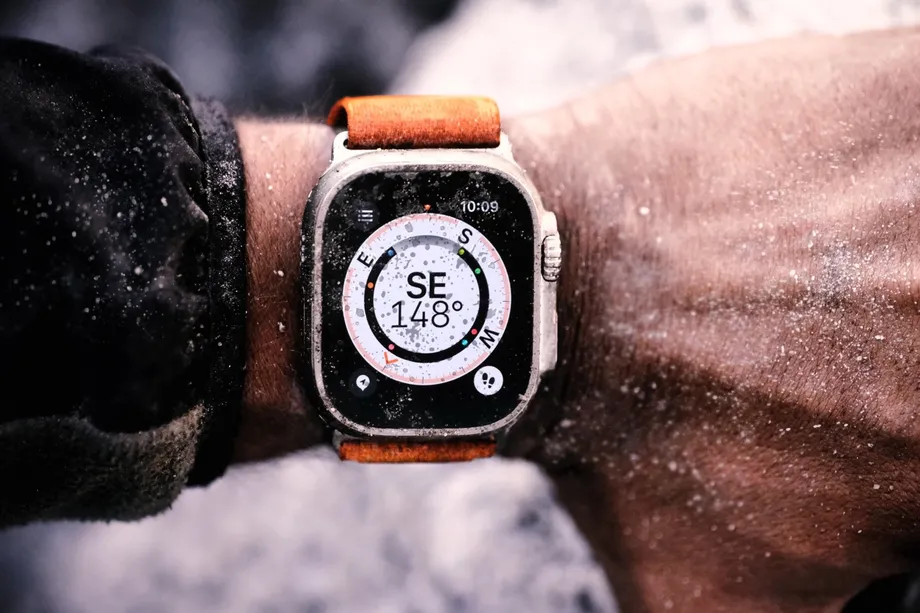 After years of creating smartwatches, Apple finally dared and presented a premium version of the accessory, the Apple Watch Series 8 Ultra. This model is better in every way; specifications, design and features, and is intended for the most adventurous. 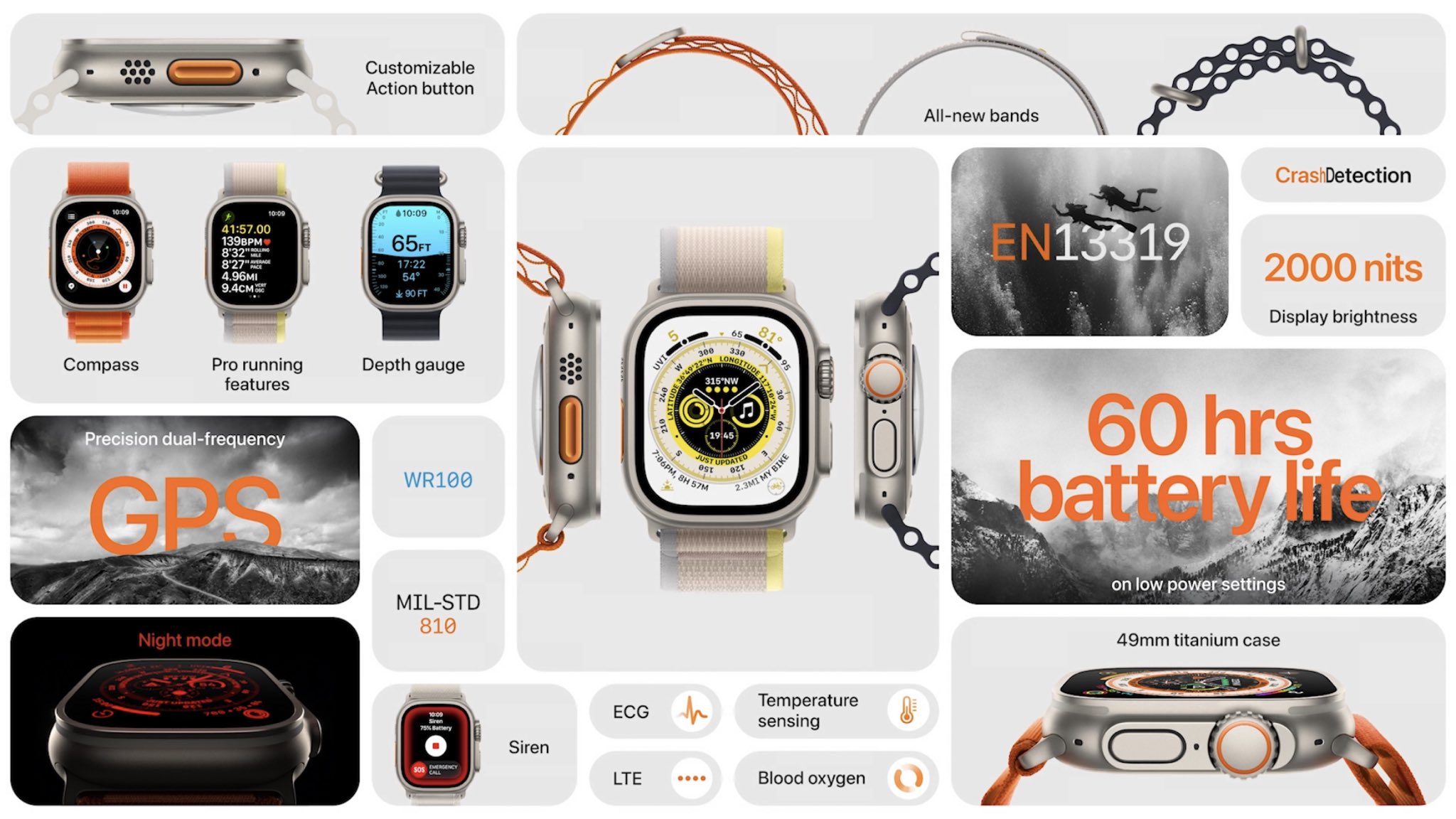 The new smartwatch has a larger display, necessary for all the extra information it can display. In addition, it also includes a 499 mm titanium case, and a resistant sapphire display with 2000 brightness. 3 microphones help to better perceive the voice and reduce the ambient sound, so that there is clarity. Interestingly, the knob and all the buttons work perfectly even if the person is wearing gloves. As you can see, this device is focused on people who like to be outdoors.

Speaking of functions, the Apple Watch Series 8 Ultra includes a customizable action button, so that it executes an action of your choice. On the other hand, it also has a night mode in which the display goes dark and the colors are exchanged, so that it is not annoying for the eyes in the dark.

An interesting addition is that of a complete compass application, which will arrive with watchOS 9, so you can return on your way if you had gotten lost, or to mark points of interest on your route. In addition, it has an autonomy of up to 60 hours in energy saving mode, which by the way does not cancel the heart rate monitor or GPS.

Finally, the watch will be a great gift for people who love water sports. This includes WR 100 and EN 13319 certification, which allows you to reach up to 40 meters of immersion without any problem, perfect for snorkelers and divers. In fact, the new operating system will also include a dedicated application for this activity.

The Apple Watch Series 8 SE will have 3 straps, Alpine, Trail and Ocean, which in theory will better withstand your preferred activity. Its price will be $ 799 USD and will begin to be distributed from September 23.

Get the perfect selfie