The high manufacturing share in China is becoming a problem for the iPhone group.

Düsseldorf, San Francisco For weeks, a state of emergency has prevailed at the plant of the tech supplier Foxconn in Zhengzhou, China. The approximately 200,000 workers of the important Apple supplier are fighting back against the strict Covid measures imposed by the government in Beijing. According to reports by the NGO China Labour Bulletin, thousands of workers fled for fear of being locked up in the factory premises. Only a week ago there were demonstrations and police operations.

According to recent analyst reports, this has a significant impact on Apple. The company manufactures almost all iPhones in the People’s Republic. The outages may amount to 15 to 20 million iPhone 14 Pro and Pro Max, according to Ming-Chi Kuo of TF International Securities. “Due to the high price of the iPhone 14 Pro series, Apple could generate significantly less revenue in the current quarter than the market expects,” the analyst said, “and 20 to 30 percent or more”.

This would mean that Apple would miss the average revenue target of $ 125 billion expected by analysts by up to $ 37 billion in the current quarter. Kuo’s statement has weight, the analyst has close relationships with contract manufacturers such as Foxconn.

iPhone 14 Pro will no longer be available before Christmas

According to his information, iPhone production only ran at 20 percent in November, so in December it will only improve to 30 to 40 percent. The Taiwanese group Foxconn is currently luring workers back with bonus payments and higher salaries.

Other analysts are also cutting their forecasts, but less sharply. “Apple is struggling to overcome a combination of lockdowns and worker protests,” said Amit Daryanani of Evercore ISI. In his opinion, Apple can produce up to eight million fewer iPhones in the Christmas quarter, which leads to a decline in sales of up to eight billion dollars. Dan Ives of Wedbush talks about a “punch in the stomach” for Apple. 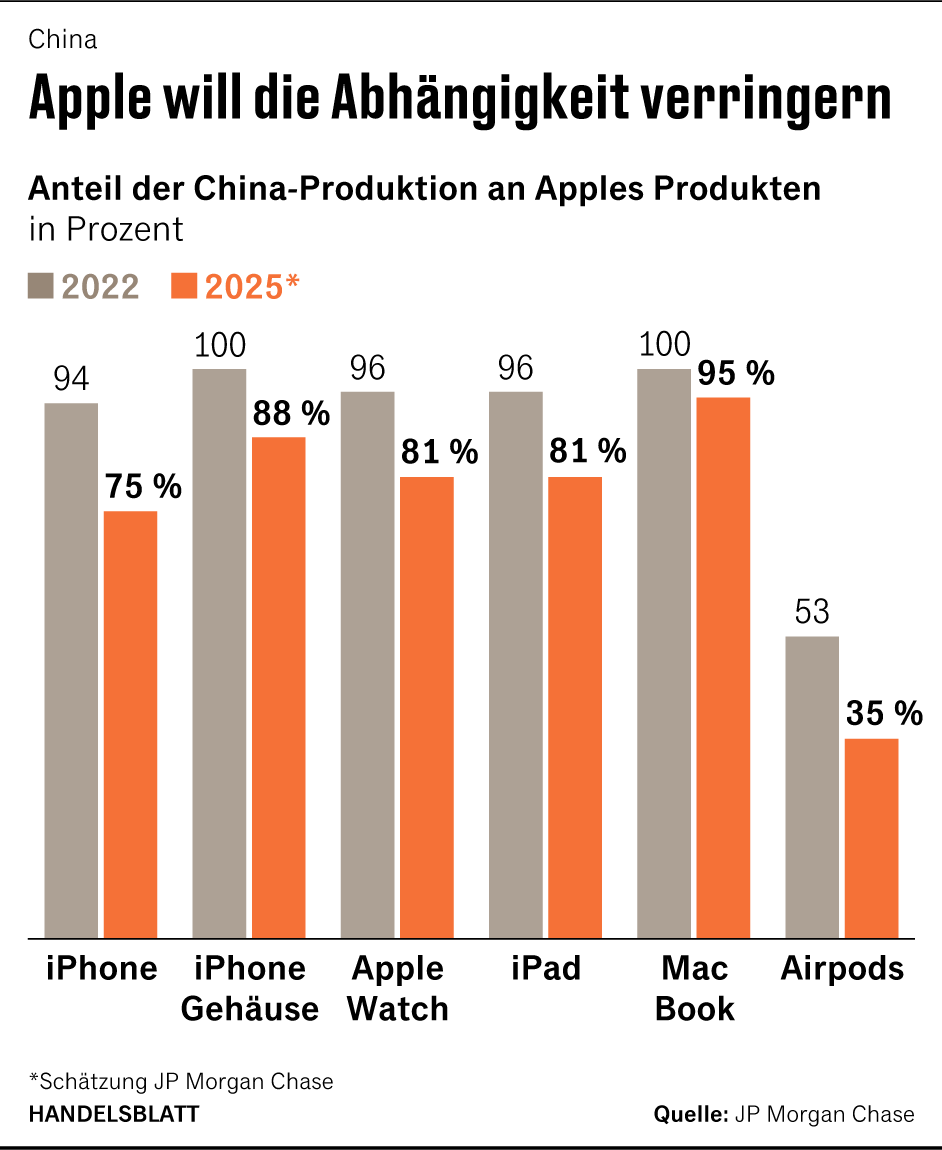 According to Kuo, Apple probably misjudged the situation in Zhengzhou and hoped for higher production. Suppliers of components for the iPhone 14 Pro were “not informed by Apple to cut deliveries, which for several weeks leads to an increase in inventory in the current quarter”.

According to the Apple website, the high-quality and high-margin iPhones of all things are no longer available until Christmas Day in the strongest sales phase of the year. The Pro models cost between 1300 and 2100 euros per piece in Germany, depending on the equipment. The basic models, on the other hand, are available almost immediately.

Kuo expects that customers will not wait for Apple’s replenishment and that the group will “lose sales” because of this, as well as due to the global recession. In fact, two of the strongest shopping days with a view to the Christmas business, Black Friday and Cyber Monday, are already over.

High dependence on China should be reduced

Under the leadership of current CEO Tim Cook, Apple has increasingly relied on China as a production location over the past quarter of a century. According to investment bank JP Morgan Chase, 94 percent of all iPhones, 96 percent of all Apple Watches and all Macbooks are produced there today.

However, the company is trying to diversify. For example, Foxconn, as the most important partner, established an iPhone production in India, the iPad is to be manufactured more in Vietnam.

But the change is taking place slowly and is difficult in view of the high quantities. JP Morgan Chase estimates that Chinese production will still account for 75 percent of all iPhones, 81 percent of all Apple Watches and 95 percent of all Macbooks in 2025.

The problems in Zhengzhou confirm Apple is building other locations, but it’s not the only reason. “Personnel costs in China are rising sharply. This is especially true for Shanghai,” said KC Quah, supply chain expert at market researcher Gartner. Wages in India and Vietnam are much lower. However, this is not directly reflected in lower production costs.

“There is a high quality of manufacturing in China, and all suppliers are directly on site. It’s not that easy to replicate in India or Vietnam,“ Quah said. He was convinced that Apple would nevertheless diversify its supply chains. “The risk of being too dependent on one country is simply too high,” warned Quah.

Modelling tool “Blender” gets the support VR via OpenXR