Olga Ortega, co-founder and CPO of HashEx’s real-time DeFi explorer AnalytEx, explains some of the concepts of decentralized protocols.

There are countless decentralized protocols and ways to use them. At AnalytEx, we know that more than a thousand smart contracts are created every month with MasterChef’s signature. These are usually referred to as farms. In addition to the farms, many people also know about the existence of pools, which in turn are divided into several well-known species such as Liquidity, syrup or staking pools be subdivided. But how do they really differ?

What is a liquidity pool?

A liquidity pool is a ”pot” with a token trading pair. The liquidity of both tokens is deposited by so-called liquidity providers. These investors create an LP token from the trading pair and receive income from all swaps made between these two tokens on a specific decentralized protocol. The only risk you take when creating an LP token is the so-called “impermanent losses”.

The crypto market is known for its volatility, that is, for the sharp fluctuations in the price of tokens. Liquidity providers can therefore suffer a volatile loss if two tokens in the liquidity pool develop differently in price (negative correlation). The consequence is a change in the ratio between the tokens in the pool. This is done in order to stabilize the total value of the pool.

An example: an investor pays 310 BUSD and 1 BNB into the liquidity pool and receives an LP token in return. In addition to this investor, there are 9 more investors who deposit the same amount into the pool. The total value of the pool is now 10 BNB and 3,100 BUSD, so a total of $ 6,200. Each investor owns 10% of the pool, and each of them would receive 1 BNB and 310 BUSD back on a withdrawal.

But what happens if the BNB price falls?

The pool then holds more BNB, but less BUSD. Investors will still have 10% of the pool, but only in USD. This amount will be less than the original amount, because the price of BNB has fallen in relation to BUSD. This is called inconstant loss.

The loss is volatile, since this loss occurs only when liquidity is withdrawn from the pool. If the investor does not touch his investments in the pool, the liquidity value may rise again to its original level. It should also be remembered that liquidity providers receive profits from providing liquidity, which can compensate for temporary losses.

Liquidity pools consisting of pairs of stablecoins or pairs of tokens with a positive correlation (when two tokens in the liquidity pool move in price together) are considered the safest. But here, too, the following applies: DYOR (Do Your Own Research – Do your own research!)

Explanation: What is a farm?

A farm is a smart contract in which you can deposit LP tokens. As a result, you will receive an additional income in the tokens of the protocol you use. For example, if you deposit your LP tokens, consisting of the BNB-BUSD pair, with Pancakeswap, you will receive CAKE, the token of this protocol, as a reward (at the time of writing this article, the token has an APR of 20.15%). At the same time, the investor receives a double reward: for the staked LP token and for providing liquidity in the BUSD-BNB pair.

It is very common that a farm is simply referred to as a decentralized protocol with an option on farming, such as the Pancakeswap Farm. However, this is not entirely true.

In fact, it is correct to call a farm a MasterChef contract, which makes it possible to receive income in protocol tokens. Whether an investor deposits an LP token (a token pair) or a regular token does not matter here. All this belongs to the MasterChef contract and should be called a farm.

Let’s take a look at the Pancakeswap interface.

According to Pancakeswap, the FARMS tab contains farms where an investor can stake their LP tokens and earn CAKE tokens.

We observe the same situation with other decentralized protocols, for example, with Apeswap. We can stake the LP token and get BANANA – the token of this protocol.

The situation is similar with the new, rapidly developing FstSwap protocol. You can stake your LP tokens to earn FIST tokens.

All these farms fall under the MasterChef contracts of the above protocols.

However, there are also staking or syruppools, which are actually two names for the same thing. Different decentralized protocols call these pools differently. These pools have nothing to do with the liquidity pools that we talked about at the beginning of the article.

Explanation: What are staking or Syruppools?

With staking or syruppools, you can stake a regular token (usually a protocol token) in a smart contract to earn other tokens. Proof-of-stake blockchains offer this possibility. A user lends his tokens to the network to support the security of the blockchain and receives interest in return.

At Pancakeswap, for example, you can stake CAKE tokens to earn various other tokens.

The same can be observed on Apeswap. 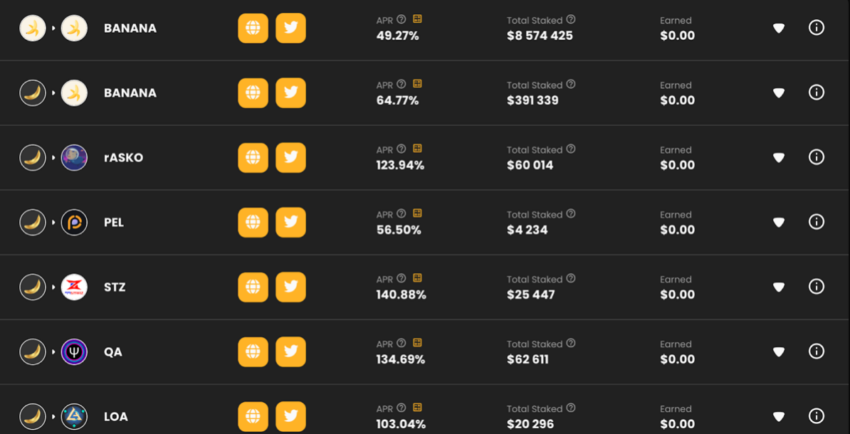 Pay attention to the top lines in the “POOLS” tabs of both protocols. There are the pools “Stake CAKE to earn CAKE” and “Stake BANANA to earn BANANA”. Few people know that these pools actually refer to the MasterChef smart contract – like a farm. In contrast, all other pools belong to completely different smart contracts. This circumstance easily leads to confusion in terminology.

If an investor deposits an LP token or a regular token and earns protocol tokens (in the case of Pancakeswap, it would be CAKE), the MasterChef contract is used. We can call such pools “farm pools”.

But, as a rule, most of the known decentralized protocols do not explain this difference. The tokens stored in a smart contract are used as a criterion for classification into the various farming options. When it comes to LP tokens, the commonly used term is “farming”. However, if they are ordinary tokens, they are called “(staking / syrup) pools”.

In AnalytEx, we have listed all the pools that belong to the MasterChef contract, regardless of whether it is an LP token or a single token. Here you can see the Apeswap protocol on the AnalytEx website.

So, it can be summarized that regardless of the interface and terminology of various decentralized protocols, the following applies: If your reward is paid out in protocol tokens, you access the MasterChef contract of this protocol. Regardless of whether you use LP tokens or normal tokens for staking.

If you use normal tokens and receive a reward in other tokens, you use smart contracts from third parties, but these farming opportunities are called pools.

In order to fully understand what is happening in the DeFi space and to be able to make decisions based on data, it is necessary to understand the basic terminology and its differences.

Vivepaper, the new application for the HTC Vive camera

Don’t fall for fake reviews on the net

What is HDR in TV

Vivepaper, the new application for the HTC Vive camera