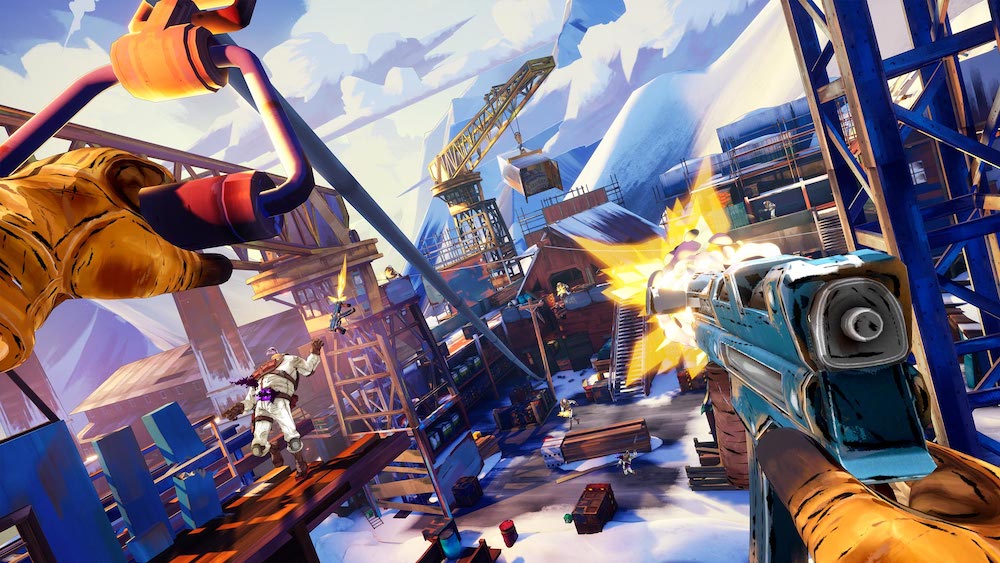 A Township Tale — A New Game for Oculus Quest

The co-op game, originally released for virtual reality glasses for PC, was announced for Oculus Quest.

Here you will discover an abandoned village and rebuild it as a community of artisans. Up to eight players simultaneously move into different classes and perform work with their own hands — as a blacksmith, miner or woodcutter. There are also classes like warrior and archer that protect the village from attack.

A Township Tale will be released on July 15 for Oculus Quest and will cost 9.99 euros.

After The Fall — New trailer

The largest project of the creators of Arizona Sunshine to date — Vertigo Games-takes players to the historically alternative Los Angeles in 2005. Humanity is greatly shaken: the drug has turned most of the world’s population into monsters, and a new ice age has begun. In the co-op shooter, up to four VR players get together and fight ice monsters with homemade weapons.

There’s a new After The Fall video that explains the cross-game features and an artificial intelligence system that adds variety to the game by changing opponents and spawn points.

This summer, After The Fall will appear in Oculus Quest, PC VR glasses, and Playstation VR.

The new music game is a mix of Beat Saber, Pistol Whip and Sin City. You run (automatically) through the dark streets, dodging bullets and cutting down oncoming opponents to the rhythm of aggressive music.

Studio Joy Way, which also developed the parkour game Stride for virtual reality, shows a new trailer. If desired, you can now add the game to your wish list on Steam .

The title will be released for VR glasses for PC in 2021.

An update called “Crackdown” has been announced for the action-packed PVP shooter Blaston, which brings a new cyberpunk-style game environment and a full-fledged single-player campaign.

The update will be released on June 21 for all platforms on which Blaston is available. These are the Quest and Rift platforms, as well as Steam.

Demeo’s excellent “dungeon crawler” for four players will soon get a new game module called “Kingdom of the Rat King”. The new content will be released on June 28.

The exclusive PSVR game focuses on movement. The new trailer demonstrates this.

I Expect You To Die 2-New Game Trailer

The trailer for the continuation of the cult game about the secret agent VR has been released, which shows new locations, story fragments and game mechanics.

In the basketball simulator, you train to throw the ball into the basket. Numerous environments and modifiers add variety to the game. You can also compete with your friends in the leaderboards. In a later update, the multiplayer mode should appear.

In da Hoop was released recently for Oculus Quest in the App Lab, and it can be played with both controllers and hand tracking. A version for PC VR and Playstation VR glasses will be available later this year.

There’s a new trailer for the VR port of the co-op survival game of the same name that shows off new VR interactions.

The game will be released for PC VR glasses in the third quarter of 2021. The quest version will appear later.

The developers of the arena shooter present in the video the hero Wood, the mushroom man, who mainly attacks opponents with his fists. The studio also presents a schedule of upcoming content.

Secret Location studio, together with the toy manufacturer Hasbro, is developing a competitive game with nerf (toy weapons). Unfortunately, there is no gameplay in the first trailer.

The game will be released for Oculus Quest in 2022.

This summer, the popular rhythm shooter will receive an update, which will revise the modifier system and add a new mod “Bullet Hell”. More details can be found in the next trailer.

Rhythm of the Universe: Ionia — New trailer and Release date

The game, which combines exploration, music, and puzzles, has been delayed again and is now due in the third quarter of 2021 for Oculus Quest, PC VR glasses, and Playstation VR.

The studio has announced a partnership with the non-profit organization Wildlife Warriors and is showing a new trailer.

A new trailer for the VR adaptation of the classic adventure game has been unveiled, showing how the puzzles are solved.

The game will be released this summer for Oculus Quest, and later for PC VR and Playstation VR glasses.

The developers of the VR adaptation show new excerpts from the single-player campaign. The action takes place during the Second World War. You will experience an exciting story from the point of view of an Italian partisan who fights against the fascists.

The game will be released on July 8 for Oculus Quest, PC VR glasses and Playstation VR.

In the survival game, you collect resources, make weapons, potions, and clothing, and explore the terrain. In the new video, the developers show nine minutes of fresh gameplay.

The studio also limited the release period to the summer of 2021. The game will be released for Oculus Quest, PC VR glasses and Playstation VR.

In this music game, you play the guitar either with the controller or with the Quest hand tracking system. The new trailer shows off fresh gameplay with the example of Offspring’s first confirmed song, “The Kids Aren’t Alright”.

The developers also announce that an air guitar game for Oculus Quest glasses and PC VR will be released this fall.

Waltz of the Wizard: Natural Magic-trailer and release date

The magic simulator has significantly updated the content, which gives the game new areas (sandbox, battle arena) and a more dynamic magic system.

The free expansion will be released on July 6 for Oculus Quest glasses and PC VR. From now on, the game is called Waltz of the Wizard: Natural Magic and will be sold at a higher price.

LEVEL UP, the most visited video game site in Latin America, launches a site in English