Fear in the crypto markets is clearly visible

This price analysis was prepared in cooperation with the crypto exchange KuCoin. The centralized crypto trading platform KuCoin was founded in September 2017. It offers a variety of different financial services, such as margin and spot trading, P2P fiat trading, staking, futures trading and lending.

After Bitcoin (BTC) fell below $21,000 over the weekend, the largest cryptocurrency is consolidating about 10 percent lower than a week ago. Ether (ETH) has also shown negative dynamics over the past week, recording a minus of almost 17 percent at a low of $ 1,576.

The situation in the economy remains tense

Inflation in the European Union (EU) continues to break all records. In an interview with the Reuters news agency, Isabelle Schnabel, a member of the Executive Board of the European Central Bank (ECB), said that the eurozone economy is slowing down and many risk factors that were still potential in June have now become real. Indicators such as consumer or business confidence have decreased, and the index of business activity has decreased both in industry and in the service sector.

The US authorities have turned their attention back to miners. Members of the House Committee on Energy and Commerce have asked four major mining companies for clarification to assess their environmental impact. The authorities fear that the miners could increase the demand for fossil fuels.

Also, more and more investors and investors are turning to the crypto sphere. For example, there are already first interested parties in the insolvent German crypto bank Nuri (at least according to Jesko Stark, the bank’s provisional insolvency administrator). In addition, the online bank Swissquote announced the launch of its own crypto exchange for the end of September.

At the same time, the European Central Bank stated that it is planning its own steps to regulate crypto assets, since “the national legislative frameworks for cryptocurrencies differ greatly”. The ECB cites the so-called EU Capital Requirements Directive, which has been in force since 2013, as the decisive guardrail for the approval of crypto companies.

This week, the US Federal Reserve’s annual symposium is scheduled to take place in Jackson Hole. There will be a kind of showdown here in September when it comes to inflation and the macroeconomic triggers associated with it. This could lead to new volatility in risk assets, which in turn could affect the prices of BTC and ETH.

According to the fear and greed index, fear is the current market sentiment.

Remarkably, after the crash, digital gold regained some of its value, but did not reach its original values.

Over the past seven days, the value of the first cryptocurrency has fallen by 12.2 percent, according to Coinmarketcap. At the time of writing, it is capitalized at $ 410 billion (with a combined market capitalization of $ 1.07 trillion).

Some analysts, for example, Charles Edwards, founder of Capriole Investments, based on the data of the “Ribbon of Complexity” indicator, have come to the conclusion that the time of the capitulation of Bitcoin miners is over. This is a buy signal, Edwards wrote in his tweet.

The #Bitcoin miner capitulation has officially ended today, making it the 3rd longest capitulation in history at 71 days.

This surrender zone was longer than 2021, and just two days shorter than 2018’s where price touched $3.1K pic.twitter.com/B3mMhKQPls

According to the crypto analysis company Glassnode, investors who bought Bitcoin in 2017 or earlier are only letting their coins run at the moment. The percentage of BTC that has remained unmoved for at least five years reached a new all-time high of 24.351 percent on August 18.

This is a good signal that the “sell-out season” of Bitcoin miners, which Cointelegraph has already written about, is over.

ETH lost almost a fifth of its value

Among the top 10 cryptocurrencies from Coinmarketcap, which fell the most in the past week, Ether was one of the leaders. The second largest cryptocurrency briefly fell to $1,575 on August 20, losing up to 17 percent of its value.

During the market correction, the potential Proof of Work (pow) fork of Ethereum ETHW failed at the $50 mark. This corresponds to about 3 percent of the course of the underlying network. 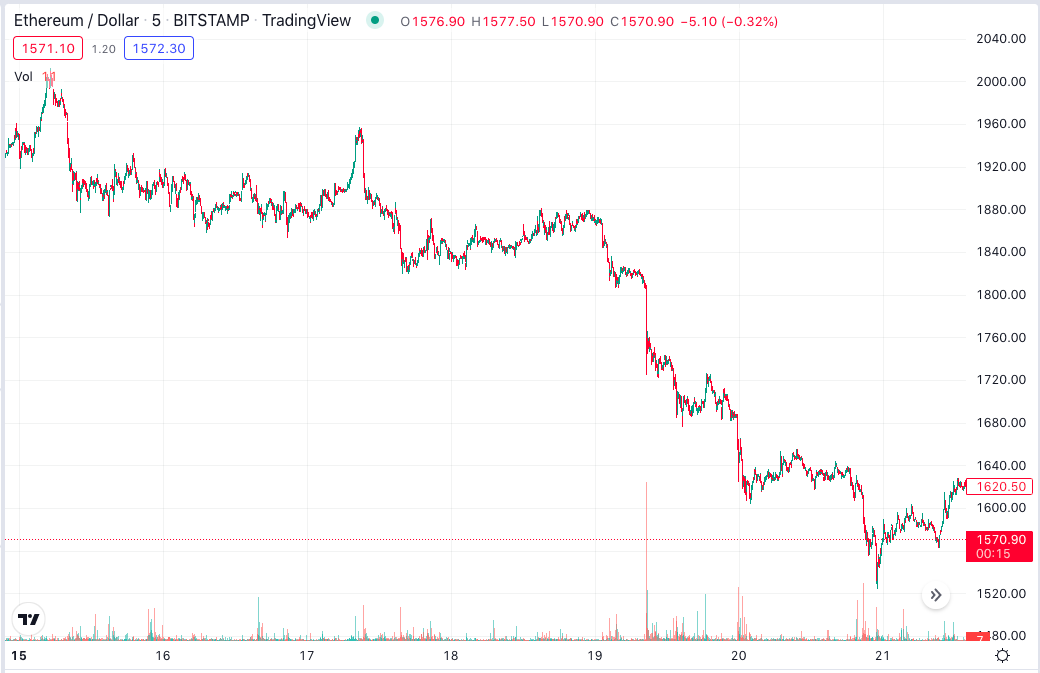 At the beginning of last week, the developers behind the potential spin-off released the code that involves the removal of EIP-1559 with the distribution of coins to miners. The community soon discovered a serious bug in it, which returned all the blocks to the state before the hardfork London. Ethermine, the largest mining pool on the Ethereum network, said that it would not support any of the potential pow-based forks.

The upcoming update of the Ethereum network remains an important topic in the crypto community. For example, CME Group plans to launch options on ETH futures before the merger, while ConsenSys experts said that economic changes will affect the value of ETH once the Ethereum Merge is activated.

Disclaimer. Cointelegraph does not endorse any content or products on this site. We want to give you all the important information we can get, but readers should do their own research before taking action. You bear full responsibility for your decisions. This article is not investment advice.

The future of Radial-G and new demo

The future of Radial-G and new demo

The future of geoinformation systems in Russia