Munich should fix a weakness of the iPhone group

Munich, San Francisco First the pleasure, then the work: Apple CEO Tim Cook spent Tuesday evening at the Oktoberfest. The next morning, the manager was still in top shape – and had good news for his more than 2000 engineers in Munich. Staff will continue to be built up in the Bavarian metropolis, the Group CEO told reporters. “Munich makes a significant contribution to the company.“

A few hundred meters away from the main railway station, the US technology company is in the process of building a new center for chip development. There is still a fence around the area where a car dealership used to stand. In the next few weeks, the first employees are to move in, which are so far spread over the city area. “We couldn’t be happier here,” Cook said.

The semiconductor specialists in Munich play a central role in Cook’s big plan: “We want to master all the core technologies we need for our products ourselves,” the 61-year-old underlined. This is the key to standing out from the competition.

However, Apple has not yet achieved this goal with the future technology 5G, the new mobile communications standard, of all things. The US group is dependent on Qualcomm, the world’s leading supplier of mobile phone chips.

Even in the top devices iPhone 14 Pro and iPhone 14 Max, which were presented only in September, Apple installs the Qualcomm Snapdragon X65 modems.

Apple invests one billion in Munich

This should change in the future. The teams in Munich are working hard on new semiconductor solutions. Apple chief technology Officer Johny Srouji did not want to comment on concrete projects on Wednesday in Munich. From corporate circles, however, it is said that the location is enormously important for developing your own 5G modems.

>>Read here: Chip manufacturers in the China trap: the most important market threatens to break away

Last year, Apple announced that it would invest one billion euros in chip development over three years in Munich. The Bavarian state capital is the largest development center of the iPhone group in Europe, Cook said on Wednesday. However, this is only a small amount compared to the approximately 22 billion dollars that Apple spent on research and development in 2021 alone.

Despite the praise of the Apple boss, it is unclear how far the specialists in Munich are with the development of the 5G modem. Analyst Ming-Chi Kuo of TF International Securities recently reported delays. “My latest survey suggests that Apple’s own iPhone 5G modem chip development may have failed, so Qualcomm will remain the exclusive supplier of 5G chips of the new iPhones in the second half of 2023.“

Previously, the US giant had assumed that it would reduce its dependence on Qualcomm modems to 20 percent already in the current year. Now, however, Apple will probably remain 100 percent with the Californian chip provider.

Apple’s own development of 5G modems has several advantages. Probably the biggest one: Apple could fall back on tailor-made chips and thus differentiate itself. In addition, Apple would become more independent from suppliers such as Qualcomm. Apple and Qualcomm have been fighting over patents in court for years.

Second, Apple could make devices like the iPhone more compact. The processor and modem are still usually separated at Apple. By developing the modems themselves, the company could combine both technologies to make smartphones smaller and more powerful.

Third, Apple could save money. In 2021 alone, the company spent about $ 68 billion on the purchase of chips, according to calculations by market researcher Gartner. The Group is by far the largest customer of the semiconductor industry worldwide.

However, the employees in Munich do not only take care of mobile communications. Another important focus is the power supply of chips, the so-called power management. According to Cook, the site has made a significant contribution to the development of processors for Mac laptops. 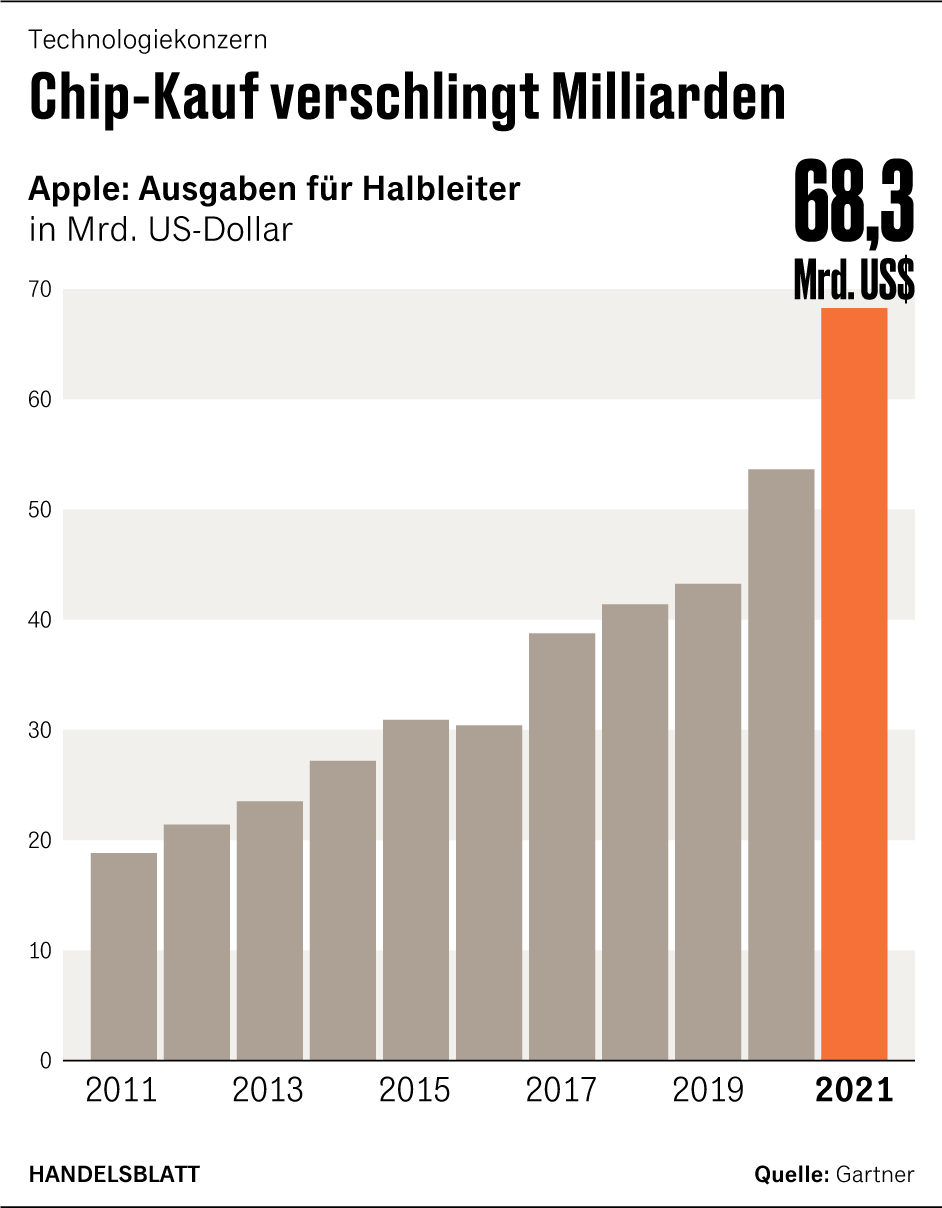 Apple launched its first own computer processor M1 on the market two years ago, separating itself from its long-standing in-house supplier Intel. Cook presented the further developed M2 this summer.

Processors are the brain of every computer. The fact that Apple has succeeded in developing its own powerful processors is by no means a matter of course. “The birth of Apple’s first processor for personal computing caused a shock wave in the industry,” said Yole market researchers. No other computer manufacturer has achieved this so far.

Almost all PCs and notebooks, including those from Apple, have so far been equipped with processors from Intel and AMD. They use the X86 architecture. Only very light notebooks and the so-called Chromebooks ran with processors based on the chip design of the British technology company Arm. The Arm architecture was essentially reserved for smartphones.

Apple has changed that. “Apple’s M1 showed that this architecture can compete in both power consumption and performance,” Yole analysts said.

Munich: As attractive as Silicon Valley

The Cupertino-based company has been represented in Munich for more than 40 years, but has only really taken off in recent years. In 2015, Apple acquired the Munich-based digital company Metaio, a recognized specialist in virtual reality. In 2019, Intel added the business with smartphone modems, which had belonged to the Munich chip manufacturer Infineon until 2010. And finally, three years ago, the Americans also acquired parts of the German-British supplier Dialog Semiconductor, which is located just outside the city.

Cook even compared Munich to Silicon Valley on Wednesday: just like the famous area in California, the Bavarian metropolis is a place “where people want to live”. This is a good argument, especially when recruiting foreign specialists.