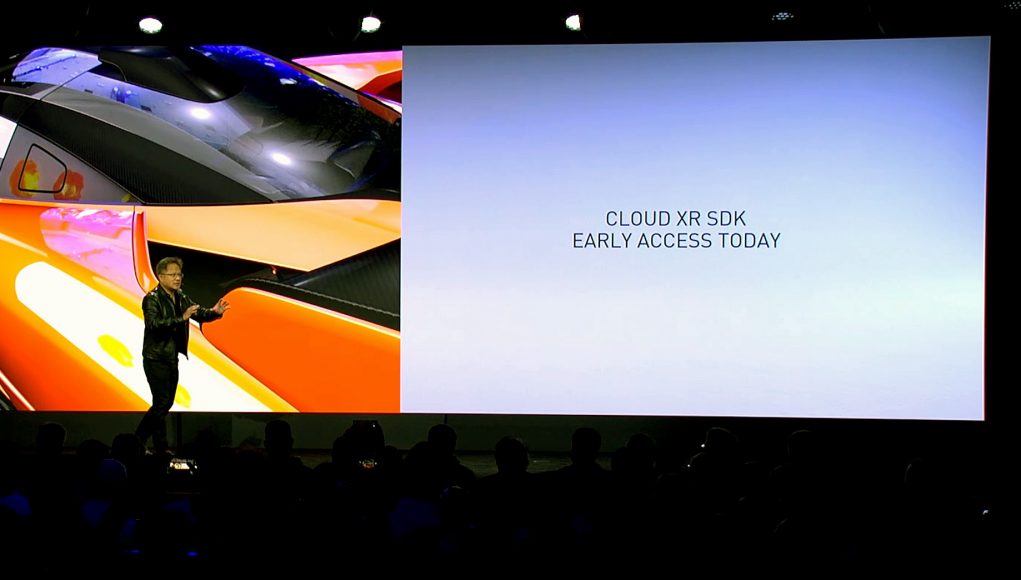 This week at MWC in Los Angeles CEO of NVIDIA Jen-Hsun Huang demonstrated the platform CloudXR designed for streaming AR and VR content in the cloud via a connection 5G. Nvidia, designed to support content SteamVR / OpenVR, said that it will release the package CloudXR SDK, which will allow companies to offer content to AR and VR via cloud service.

Nvidia wants to use a cloud infrastructure based on GPUs, so that enterprises can remotely deliver high-quality image AR and VR and deliver them to customers via 5G. The idea is to eliminate a high-performance hardware barrier VR, visualizing the effects in the cloud and transmitting them to the host device, which itself does not require very bulky or expensive equipment. Nvidia already offers a very similar service called GeForce Now, but it is designed for traditional games, not VR.

Now the company claims to have developed a cloud-based rendering pipeline, especially supporting content SteamVR / OpenVR, which the company calls CloudXR. Instead of having to offer this service directly to customers (as with GeForce Now), Nvidia is positioning CloudXR as a set of tools that enterprises can use to transfer streaming AR / VR to its customers. This approach makes sense because one of the key parts of this puzzle is the 5G network (thanks to its potential for low latency), and Nvidia hopes that the operators, creating a 5G network, wants to offer streaming CloudXR as a way to attract customers to their network.

The system is designed to work with the content SteamVR / OpenVR and streaming capabilities to client software running on Windows or Android, which may include a host PC running Windows, a standalone headset based on Android or even portable devices (portable devices AR).

Nvidia says that the system is working on a “dynamic optimization of streaming options and maximises the image quality and frame rate, so the experience XR can maintain optimum quality in all network conditions”. But the company isn’t saying specifically about the latency requirements, except that CloudXR offers a “no detectable difference in the delay” in comparison with the performance displayed locally.

Fine tuning demonstrations on the stage are not yet clear, so we cannot be sure whether it was a demonstration of the full pipeline of the data center to the device, or locally presents an example showing the capabilities of the CloudXR without the inclusion of network transmission.

Streaming AR and VR from the cloud for a long time remained a technical possibility, which end up more constrained by latency than by bandwidth constraints. Although CloudXR, of course, designed to provide minimal latency, another important part of the delay in the pipeline of cloud rendering is the delivery on the network — once the frame leaves the data center, it is necessary to transfer to the headset without creating a much larger delay.

Although 5G has a lower latency than many existing network infrastructures, the so-called “edge computing” is another important piece of the puzzle with a delay. Low latency depends on the physical distance between the datacenter and end point, and network capabilities; edge computing is the concept of placing cloud data centers physically close to users to reduce latency.

For example, one data center in the center of the continental United States may have too much delay to the time when it reaches the coast of the country for a viable experience CloudXR. In the boundary calculations it is proposed to use a distributed cluster of data centers that enables the rendering in the data center closest to each individual user, thereby reducing the delay arising from the physical distance.

It is unclear what the requirements for latency, Nvidia recommends to do CloudXR viable, but being within the range boundary of the computational node can be as important to the equation as 5G.

BlackRock relies on Coinbase – This leaves the market cold