Samsung Electronics, LG Electronics and Sony is more than 50% of LCD TV market in 2011 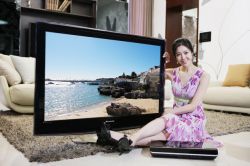 Samsung Electronics, LG Electronics and Sony, the three leading LCD TV vendors in the world, will ship next year for 45 million, 35 million and 35 million TV sets, respectively. However, this figure
will be more than 50% of the world supply of LCD TVs in 2011, which are expected to reach 220 million units.

Other manufacturers, in particular, such as Sharp, Philips and Toshiba are going to release to the world market at 11-18 million TVs in 2011.