This is how the Playstation manufacturer reinvented itself

Tokyo Sony is currently playing for its future on the grass of the Etihad Stadium in Manchester. In February, CEO Kenichiro Yoshida agreed with the English football club Manchester City to virtually recreate their home stadium in the metaverse, the increasingly lifelike decorated digital world on which the digital economy is betting as the next boom. There, for example, fans should be able to relive “live” games, play video games in real time and meet with other fans.

For Yoshida, the three-year trial is a digital prototype for conquering a new market. “There is an opportunity to create a new ‘Kando’ through technology,” he explained at a strategy meeting on Wednesday, just a week after the company reported a record profit of 8.7 billion euros.

Kando, which translates as emotion or enthusiasm, is the key term for Sony’s rebirth after a deep crisis. The word stands for the company’s mission to move the hearts and minds of customers and to connect people through content and technology. That sounds off-kilter. But Yoshida’s speech shows how much the term reflects the rapid change of the former figurehead of the Japanese electronics industry.

20 years ago, Sony, the inventor of the transistor radio and the Walkman, was still the world market leader in flat screen TVs and a driving force in notebooks such as mobile phones. Now these devices do not take place in the presentation at all or only on the sidelines. Instead, Yoshida devoted most of his time to video games, music studios and the film business, which he sees as growth engines in the virtual world. “The Metaverse is a social space for live events, where music, movies and anime cartoons meet and expand together.“

From the point of view of Serkan Toto, founder of the video game consultancy Kantan Games, the turnaround has finally been achieved. “The Sony group of today is no longer the one of yesteryear,” says the Tokyo-based expert. Sony continues to be a conglomerate that combines financial services, divisions of the entertainment industry and traditional electronics. “Essentially, entertainment such as video games, music or movies has established itself in the public perception as a brand core,” says Toto.

Analysts see it the same way. Doug Creutz of the US investment bank Cowen described Sony as an “underrated entertainment powerhouse”. The importance of the three divisions for Sony’s resurgence cannot be overlooked.

First a pioneer, then into the crisis and now finally successful

Back in the 1990s, Sony was already working on a networked world under the slogan “Digital Dream Kids”, in which content such as video games and films drive the sale of hardware. The group even experimented with the first versions of the metaverse. Only software and hardware were not yet ready for the idea.

Instead, at the beginning of the century, Sony was rushed into crisis by more agile Asian rivals such as Samsung in its traditional core business of televisions or mobile phones. Between 2008 and 2014, Sony made losses or was just profitable.

Not even hard cuts such as the sale of the computer division or the focus on premium models for flat-screen TVs and smartphones helped. Only the appointment of the Playstation specialist Kazuo Hirai as the new CEO brought the turnaround in 2012.

in 2013, the manager declared “Kando” the new engine for the purpose of the company and entertainment. The current CEO Yoshida has accelerated this course since 2018. The 62-year-old former chief financial officer has not only made the cut-back divisions for televisions and smartphones profitable again.

Sony’s focus on entertainment is pushing business figures to new heights. In the financial year ended at the end of March, the division already accounted for 51 percent of sales and 64 percent of operating profit. 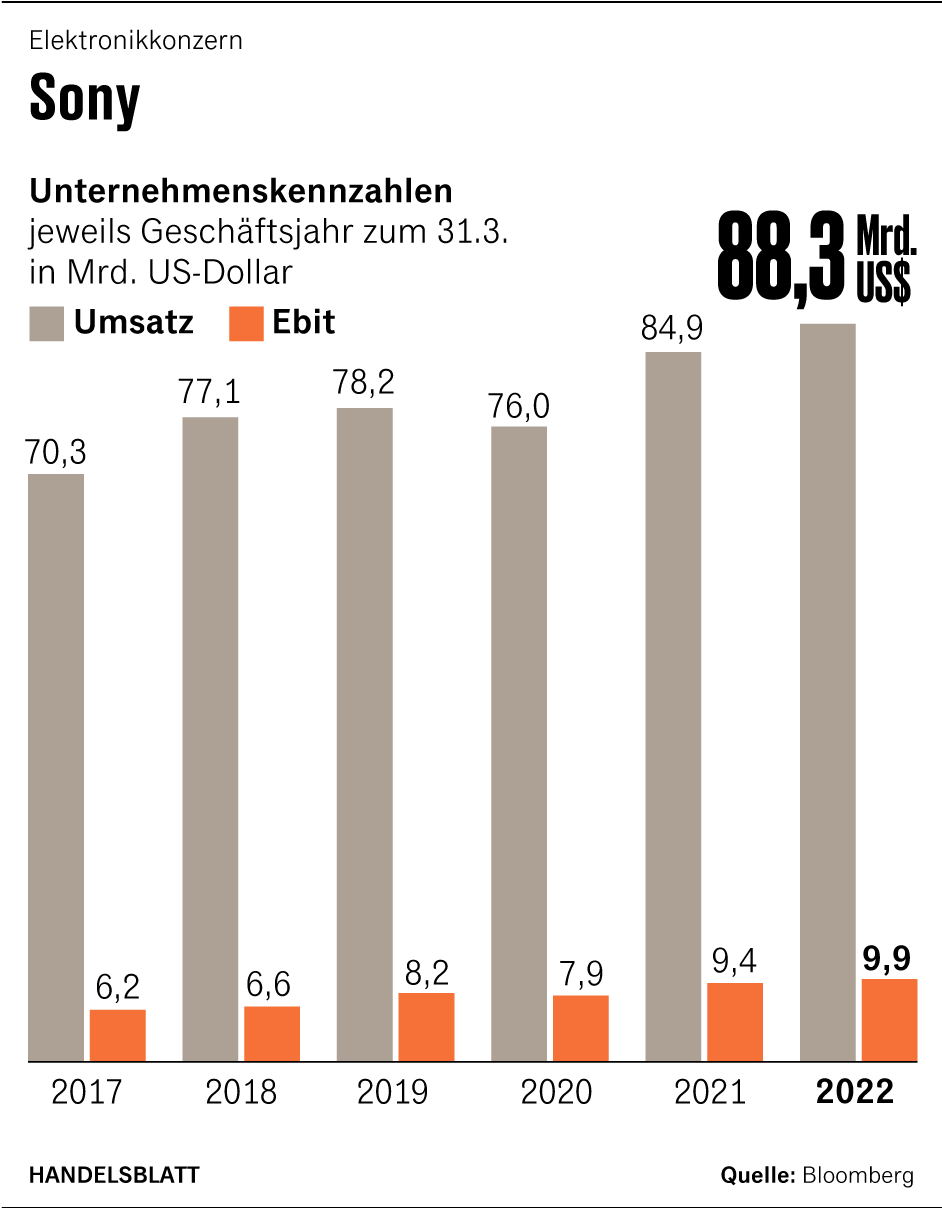 Although the Group predicts less profit for 2022 due to rising commodity prices. But for analyst Koto Ezawa of Citigroup Japan, growth is not over yet: “We like Sony’s long-term growth prospects, driven by the development of virtual worlds and the metaverse.“

Video games as a pillar, music and films as a growth market

The most important pillar, with a turnover of 20 billion euros and an operating profit of almost three billion euros, is Sony’s video game division. With the more than 100 million customers of the Playstation Network, it is also the largest Internet platform of the group. It owes its growth to the Playstation console, which is fighting for gamers with Microsoft’s Xbox.

The demand for the Playstation 5, even in its second year, far exceeds the supply, because the global chip crisis is slowing down production. Sony said last week that it had secured enough chips for 18 million PS5 for 2022. Analysts expect up to 22 million interested parties.

However, investors are also highlighting the smaller music business, especially in the current times of crisis. “It can best withstand an economic downturn,” says Yasuo Nakane, an analyst at Mizuho Securities. Due to the global growth of streaming platforms, the music division could become Sony’s profit engine.

The demand for the console far exceeds the supply, even in its second year,

The film business is hardly inferior to this. Sony benefits from not running a streaming platform like Netflix itself, says analyst Doug Creutz. He therefore described Sony as a “weapons supplier” that can satisfy the film hunger of all platforms.

However, Sony wants to selectively develop platforms itself. So the Japanese bought Crunchyroll, a distribution channel for anime films. In principle, however, the Group wants to focus on content and artists, said CEO Yoshida. This also includes converting video games into films and holding concerts on the gaming platform.

In addition, Sony continues to make a living from its early investment in image sensors for digital cameras and smartphones, in which the Japanese are world leaders. Sony is also investing heavily in artificial intelligence and robotics.

Through its premium televisions, smartphones and cameras, Sony continues to develop important software and hardware, which in turn drive the development of digital entertainment. Sony is even taking another trip that even Apple has shied away from because of low profit margins: with the car manufacturer Honda, it wants to build electric cars from 2025, which Yoshida says should redefine entertainment on wheels.

However, the excursion into mobility is also viewed critically. In fact, the competition is growing in core businesses: Facebook is expanding into virtual worlds. South Korean archrival Samsung wants to dethrone Sony in image sensors. And Xbox maker Microsoft bought game developer Activision Blizzard for $69 billion in January to beat the Playstation.

However, the company is now rich enough to compete again. For example, the Group is investing in a chip factory that the Taiwanese chip group TSMC is building in Japan. Yoshida also expects a lot from the planned purchase of the game developer Bungie, with $ 3.6 billion almost a bargain. “We want to learn the technology for live services from Bungie,” Yoshida said. This is particularly important in the metaverse, where communication in real time counts.