If you want to improve the usability of a website or web app, you should first take care of the user interface. This guest post shows where companies can start.

Even the user interface can decide on a good or bad user experience and thus the success of a project.

It has long been no secret for operators of online shops and consumer-oriented web applications: an attractive, powerful and easy-to-use user interface brings many advantages. It not only ensures easier operation and an attractive appearance of the applications and software, but also increases customer loyalty and has a positive effect on product value, sales and profit.

In the B2C sector, this has already proven itself for a long time, and although this knowledge is also available in the B2B sector, implementation is often still lacking there. Because enterprise software, which is usually available as software-as-a-Service (SaaS), often looks different: boring layouts and confusing user interfaces are not uncommon, the operation turns out to be complicated and users are offered few opportunities for interactivity. In the worst case, the performance is also poor.

This can have negative consequences, which can even go so far that users completely abandon the use after a short time and turn away from the provider. Therefore, a fundamental revision is indispensable – and this is faster than many companies think.

Rapid feasibility has been proven in practice

To optimize user-friendliness, investments should be made in user experience (UX) and user interfaces (UI). That these are really worthwhile is also evident from the result of a Forbes analysis on the return on invest (ROI) of UX expenses. Accordingly, every euro invested in UX / UI pays off tens to hundreds of times again. This can be explained by the positive consequences of the improved user-friendliness:

This means that the calculation not only applies to UX /UI, but can also be applied to websites, apps and B2B tools, which also have a beneficial effect on ROI. First-class UX/UI is a prerequisite for anyone who wants to improve their business. Nevertheless, UX/UI usually does not receive the necessary attention when developing business software.

However, significant, business-critical functionality is of little use if the software is rejected by customers due to a lack of user-friendliness. It therefore plays a decisive role for customer loyalty, which in turn is of great importance for the business. For example, a study shows that every percent more for acquisition increases profit by 3.3 percent, but every percent more in customer loyalty allows a profit increase of almost 7 percent.

However, many providers shy away from the costs and time associated with a fundamental modernization of their enterprise legacy systems, and therefore decide against such investments. However, they often overlook the fact that the structural optimization of enterprise software, in addition to better customer loyalty and functionality, can also significantly reduce maintenance costs at the same time. In addition, more complex modernization projects can now be set up with professional support within just two months.

Towards a better UX/UI in six steps

Business analysis requires that overarching requirements be listed and needs defined. Which key figures need to be improved and where are the parameters? For companies, it makes sense to create a customer journey map (CJM) that captures the customer’s interactions along with the associated emotions.

During the technical analysis, the architecture of the application should be checked by experienced software architects with regard to the CJM as well as the key figures. Attention should be paid to the following aspects:

As part of the prototype development, the so-called mockup, a clickable, prototypical model based on the CJM, is created taking into account the technical improvement possibilities.

In the subsequent prototype test, this model is now checked by users for the desired functionality. With a low consumption of time and resources, problems can be made visible at an early stage.

The design development includes the development of the actual design mockup, which was previously tested and finalized on the basis of the prototype.

For web development, the individual subtasks must now be defined:

The six-step process described here is a proven procedure, which, however, must be seen iteratively. During the development phase, new requirements or technologies can arise again and again. It is therefore important that companies have a view that the quality of the business and technical analysis also determines the quality of the results in the end.

Success with checklists and experienced partners 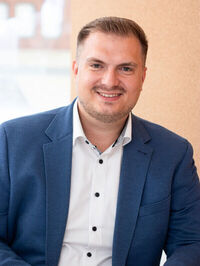 With the increasing expectations and the increasing competition for companies in the B2B sector who have already optimized their UX/UI, modern UX/UI is becoming increasingly business-critical for enterprise software. With the help of the checklist above and an experienced partner such as WaveAcess, who has in-depth expertise in UX / UI modernization and is available to support, substantial improvements to the appearance and structure of your software can be carried out within a short time. Companies benefit from improved customer loyalty, save maintenance costs and achieve a sustainable increase in profits.

Sberbank has agreed with IBM