Beijing The Chinese internet company Tencent has recently grown more slowly than it has since its IPO in 2004. The fourth-quarter figures, released by Tencent on Wednesday, show the extent to which regulations are hitting China’s tech companies. Previously, the online retailer Alibaba had already reported the weakest growth since 2014.

Tencent achieved a sales increase of only eight percent between October and December. Online advertising revenues declined for the first time in the company’s history. In the important gaming segment, business on the domestic market practically stagnated. The authorities had severely restricted the online playing time for young people in 2021. Tencent President Martin Lau spoke of a “difficult year”.

The Chinese supervisors have introduced a whole series of new laws in the past year. With this, the government wants to regulate the platform companies more closely and limit their market power. The approach is intended, among other things, to limit data collection frenzy and anti-competitive practices and to ensure the stability of the financial system. The industry had been driving a “ruthless expansion” for years, Lau was self-critical.

The dramatic situation in the sector is shown by ongoing speculation about mass layoffs. Last week, the Reuters news agency reported with reference to insiders that Alibaba and Tencent want to separate ten to 15 percent of their workforce in some business areas. The car service provider Didi is also planning a job reduction.

At the end of last year, Alibaba had more than 250,000 employees, and more than 94,000 people work at Tencent. Although staff will be reduced in some areas, the total number of employees is expected to grow in 2022, it was said at the Tencent annual press conference. In addition, share prices have fallen significantly on an annual basis. The Handelsblatt has analyzed how the large Chinese tech companies are affected by the regulation.

The Group’s financial year ends on March 31. Most recently, the company reported the weakest growth for the months of October to December since the IPO in 2014. In the e-commerce sector, which accounts for around 85 percent of sales, it is facing growing competition from competitors such as JD.com and feel Pinduoduo.

Alibaba cited high losses in the market value of its holdings as the main reason for the drop in profits of more than 74 percent in the important quarter between October and December. The financial subsidiary Ant, in which Alibaba still holds 33 percent, the authorities banned the planned mega IPO at short notice in November 2020. Since then, it has been restructured at the behest of China’s financial regulators to reduce risks.

However, operating profit also fell by more than a third in the last quarter of 2021. Group CEO Daniel Zhang stressed that in the future there will be a greater focus on retaining customers instead of growing through acquisitions. The formerly most valuable Chinese company has lost almost $ 500 billion in stock market value since the start of the regulations, according to calculations by the financial data service provider Bloomberg.

The search engine operator suffers less from tech regulation than other large platform companies. However, Baidu is feeling the effects indirectly. The demand of important advertising customers from the games and education industry has fallen sharply because these areas have received strict requirements.

Nevertheless, the online advertising business, which contributes almost 60 percent to Baidu’s sales, grew by twelve percent last year. The video platform Iqiyi, which provides for another 30 percent of the revenues, also rose slightly. However, at the annual press conference at the beginning of March, Baidu CEO Robin Li warned that the company would not grow as much at the beginning of 2022 as it did at the end of last year. 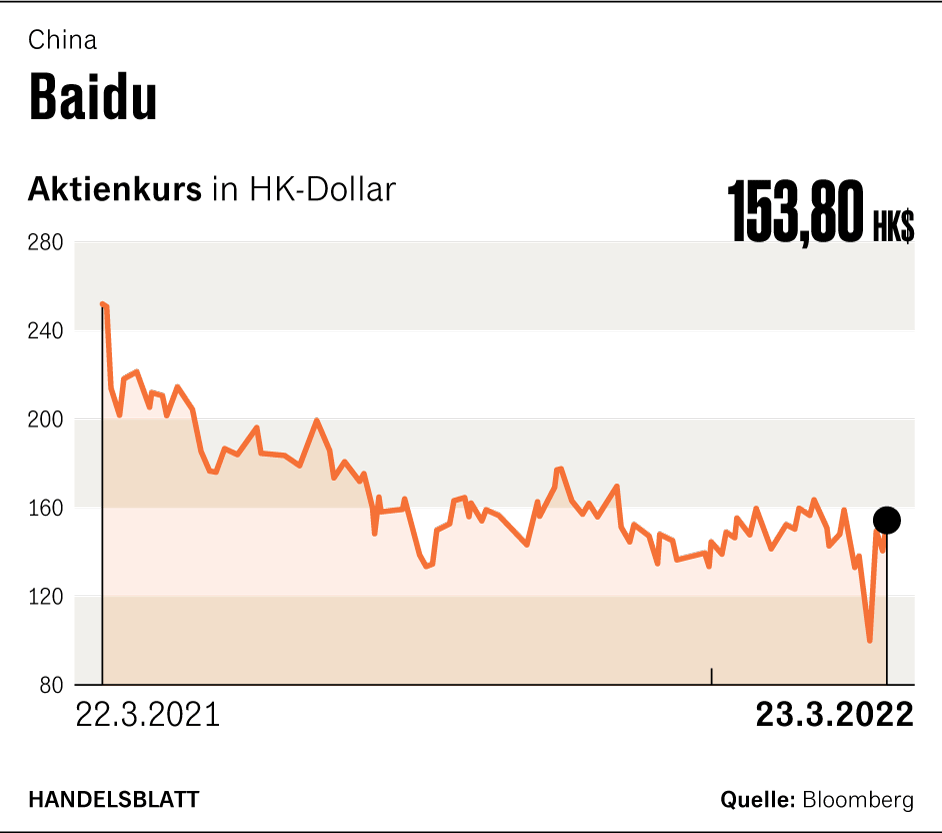 Despite the growth last year, profit fell by more than 50 percent compared to 2020. Similar to Alibaba, this is due to the high losses in the value of investments, which are reflected in the annual financial statements with their respective market value. Operating profit, on the other hand, rose by around 36 percent.

Didi: US IPO angers the supervisors

The car service provider is most affected by the tougher course of the supervisory authorities. The company is not one of the dominant platform groups. But with its IPO in the US last summer, Didi has moved into the focus of the cybersecurity regulator CAC. She accuses Didi of endangering national security through the US IPO because sensitive data could fall into the wrong hands.

As a punishment, the Didi app was removed from the Chinese app stores. To date, the company has not been able to gain any new customers on the domestic market.

Didi has not yet provided any figures for the past financial year, let alone given a date for it. But the last available, unaudited figures from the third quarter of 2021 show how sales shrank. The loss amounted to the equivalent of around 7.8 billion dollars in the first nine months. 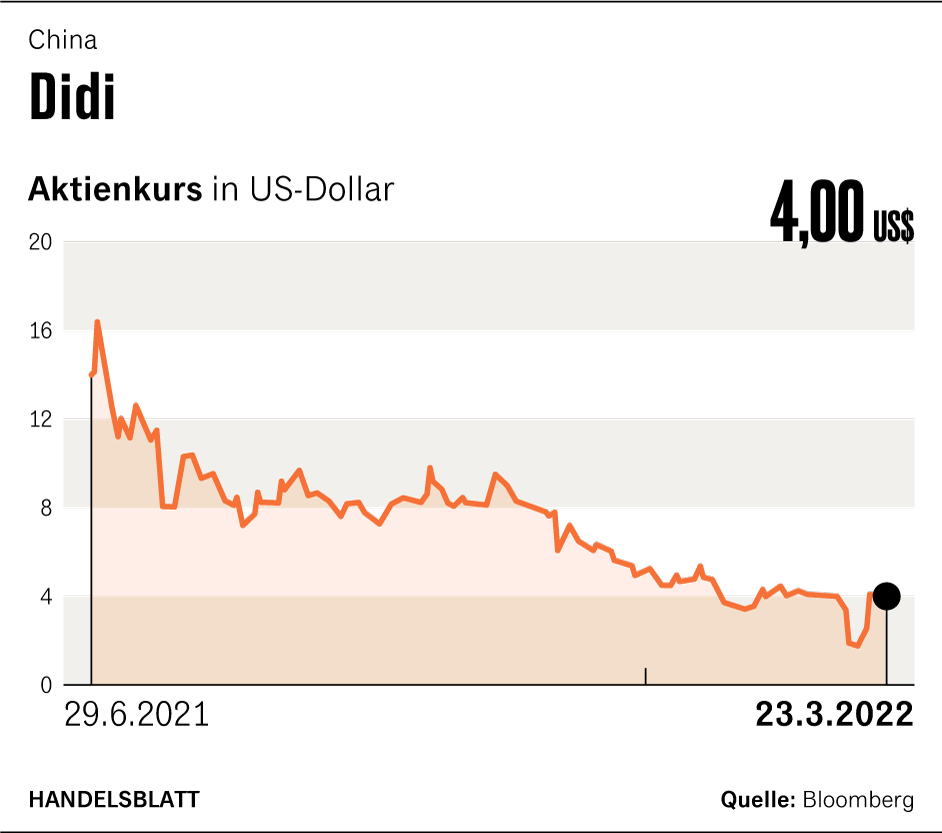 At present, it is not in sight that the supervisors will leave the company. For example, the taxi service provider apparently has to postpone its planned IPO in Hong Kong and thus also the delisting in New York. This was reported by the Bloomberg news agency in mid-March. Accordingly, the cybersecurity authority still has objections because the protection of sensitive data is not guaranteed.

However, according to media reports, financial regulators could ask Tencent to spin off Wechat Pay into a separate financial holding company. At the press conference, Tencent President Lau confirmed talks with regulators on this issue. In addition, according to a report, Tencent faces a record fine for alleged violations of anti-money laundering regulations in the payment app. 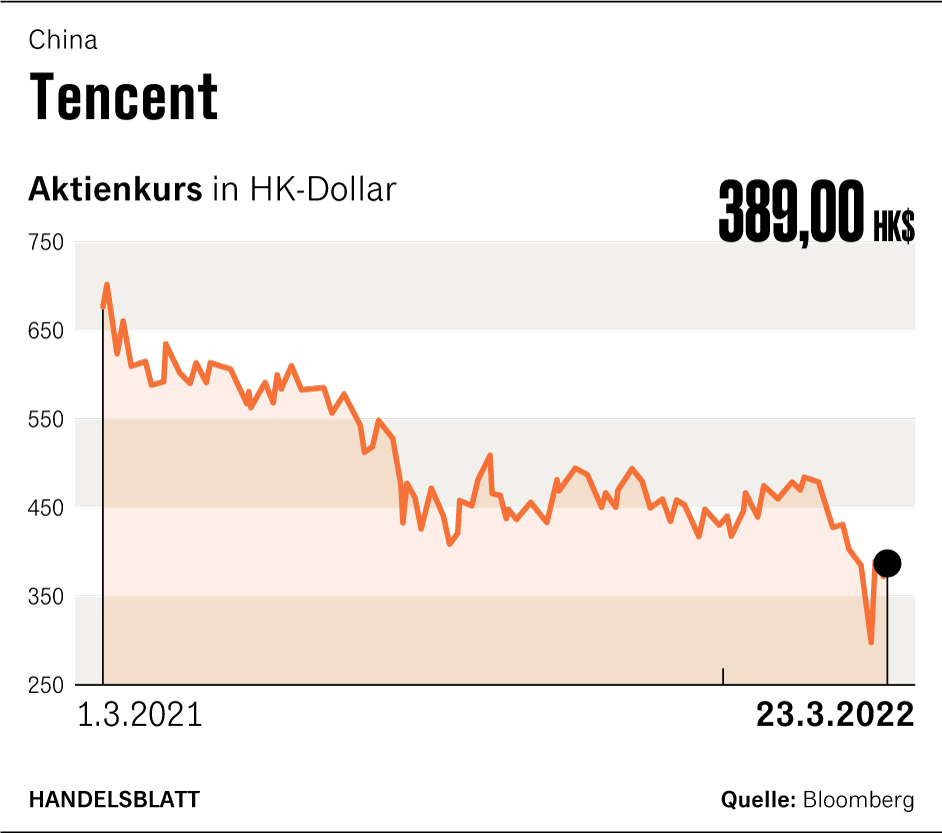 Despite the regulatory headwinds, Tencent was able to increase its net profit by 40 percent last year. However, the plus comes, among other things, from the sale of shares in the online retailer JD.com and other investments. Adjusted operating profit rose by only seven percent.

Hope for the end of the regulatory wave

Recent statements from the state leadership recently gave hope to the stock markets for an end to the wave of regulations in China. The government recently called on the authorities to complete the “corrective work on large platform companies as soon as possible” and introduce uniform and predictable regulation.

Nevertheless, industry experts remain skeptical. In a widely shared post on the short message service Weibo, it was said: there can be no talk of an all-clear until the Didi app is available in the store again, the Alibaba financial subsidiary Ant is allowed to resume its stock exchange plans and the Tiktok parent Bytedance also receives permission for the IPO.

GingerVR tools against nausea in VR