This price analysis was prepared in cooperation with the crypto exchange KuCoin.

The centralized crypto trading platform KuCoin was founded in September 2017. It offers a variety of different financial services, such as margin and spot trading, P2P fiat trading, staking, futures trading and lending.

Last week, sentiment towards Bitcoin (BTC) and Ether (ETH) was rather mixed: on the one hand, Tesla announced that the company had sold 75 percent of its Bitcoin inventory, which triggered a decline. On the other hand, BTC and ETH have broken through the upper limits of their range, in which both have been for several weeks. Both BTC and ETH have been able to stay above this range so far.

BTC: Erupted Over the flag and still over it

Last week, Bitcoin was able to break out over the flag tending downwards and so far it can hold above this constellation. This could indicate a recovery.

Currently, Bitcoin is at about $ 22,570, and he even managed to recover from this level.

Last week, Tesla announced that the company has sold 75 percent of its Bitcoin inventory for $936 million. This has triggered a slight decline. However, there was no decline in the market as a whole.

On July 19, Bank of America released its latest fund manager survey entitled “I’m so bearish, I’m bullish”. In German, this means something like “I’m so bearish that I’m already bullish again”. The report talks about investor pessimism, the expectation of weak corporate profits and the lowest share allocation since September 2008.

However, Grayscale analysts said the bear market could last for another 250 days if the market behaves as it has in the past. If the analysts are right, the next bull market is expected in spring 2023.

Last week, Ether did not let the flag tending downwards stop it. The coin was able to break out over this constellation.

As a result, Ether, like Bitcoin, no longer fell sharply. The second largest cryptocurrency broke through the flag’s cap at $ 1,270. There is also a local up flag on the 1-day chart at the moment. If the pattern is completed, it can push the ether price up to $1,800 (local flag is shown in red). 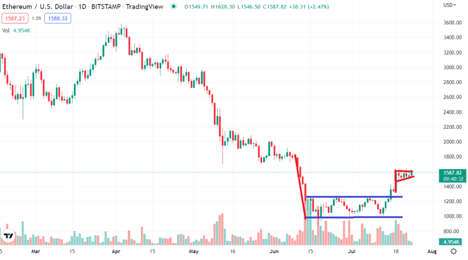 The price development of ETH has been positively influenced by the recent announcement of an exact merge date. With the so-called merge, Ether completely transitions to a PoS.

A major reason for the increase is the continuing demand for ether on the central crypto exchanges. According to a recent tweet from the on-chain crypto analysis platform Glassnode, the ether outflow from the various central exchanges has risen to a 13-month high.

According to data from Cumberland, there are currently only institutional buyers of ether, which could signal a further increase.

“Start Your Engines” by Project Cars

Cloud the Google results for may