Hardly any investor would have made the forecast in the bull market 2021: Bitcoin will fall to 20,000 US dollars in the summer of 2022. Crypto is not in a good light due to the problems around Celsius, 3AC and Terra. What was different in 2017? And why did this crash happen?

The market is currently in the so-called crypto winter. So it’s time to process the currencies on Coinmarketcap and acquire knowledge. Because only those who know which coins could dominate the market can make a lot of money in the bull market.

But why are we in a bear market at all? And what is different this time than in 2017? Should you buy now? Or invest later?

Over $2 billion in market capitalization has been flushed out since November 2021. This equates to a decline of almost 70 percent, even better than at the low of 2018: there it was about 87 percent.

To everyone’s surprise, Bitcoin with a price of minus 70 percent can still hold up just ahead of Ethereum with minus 80 percent. The list of all cryptos is still mostly red.

A picture of coinmarketcap.com

It is striking that BTC could not really maintain its market dominance in either a bull or bear market. While it was still around 90 percent before all the ICO hype, this dominance steadily decreased in the following years. Bitcoin is now at comparable values, as it was at the low of 2018: around 35 to 40 percent.

Among other things, the emergence of the many different blockchains with all their advantages and disadvantages. DeFi, stablecoins, NFTs and much more: The list is now much longer than in 2018.

But it is precisely these possibilities that have now brought us into this situation.

Web 3 companies on the rise: Ethereum has made it possible

Vitalik Buterin already added an important feature to the blockchain in 2014 with the Ethereum project: Smart Contracts. Without the programs, we wouldn’t even be able to set up simple DeFi protocols these days.

Three years later, the problem begins: The ICO bubble. This is still compared by many critics with the dotcom bubble of the 90s or 2000s. For a long time it went well: sometimes 1000 percent and more could be generated almost overnight. Each product found a buyer in a highly unregulated market.

Elections on the blockchain? No worries! The next decentralized Facebook? But of course! Smartphones with a decentralized operating system? It takes Apple a year for a new phone, but we produce it in 2 weeks!

The promises were great – the disillusionment afterwards much greater. How long the fundraising continued after the bubble burst can be seen on this chart: 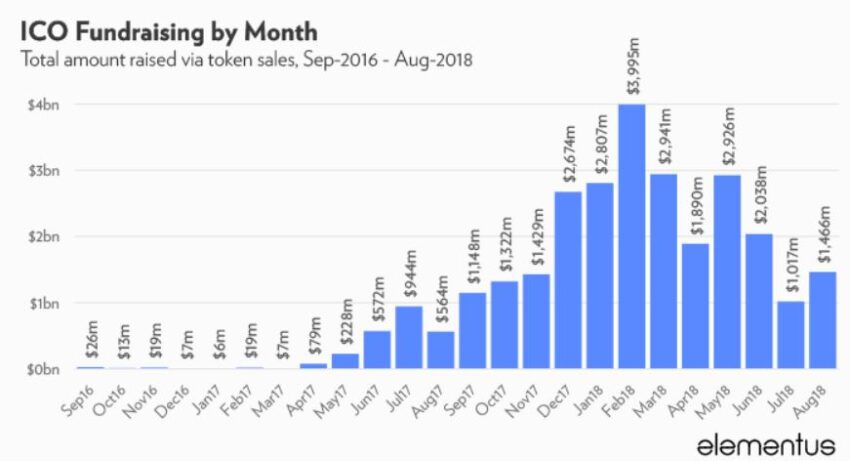 Investing was made easy back then. Wallet and ETH needed an investor at that time, then he was already allowed to get started. Quickly get on the whitelist and then make a 1000 percent profit tomorrow.

The bear market had to come and pulled many ICOs into ruin. The promises to be able to exchange tokens for services or products later became nothing. Who could have imagined such a thing retrospectively?

News about Celsius, 3AC and Terra overshadow the market

While it was still mainly the ICO boom in 2018, several factors are now playing a role. On the one hand, after two years of printing money, the FED and the ECB have realized that this cannot continue and have or will raise the key interest rate.

In order to combat inflation, the US Federal Reserve is also not afraid of radical steps: by the end of the year, it wants to get to about 3 percent. The ECB is taking a more leisurely approach, but is now raising interest rates as well.

Since the crypto market has had a high correlation with stocks, especially the NASDAQ, since the beginning of the COVID pandemic, prices are sailing south together.

Decentralized finance, in particular, offered the big players on Wall Street the opportunity to make lucrative deals. Among them there is also a well-known candidate: Celsius. But the bad news actually already starts with Terra Luna and Three Arrows Capital (3AC).

The decentralized banks already began to issue loans against security in the DeFi summer of 2020. Recently, more and more cryptocurrency funds and lending services also invested in the protocols, as high interest rates were promised.

“2020 and the following years show an increased benefit of DeFi shadow banks.”

In his opinion, the borrowed assets (loans) were often undersecured. When prices started to fall in the second quarter, everything was set for disaster.

First, the then third largest stablecoin UST from Terra Luna disintegrated – Celsius and 3AC were the reaction to it. Celsius took the money of its customers, lent it to others on platforms and offered up to 18 percent for it. But when the market turned around, Celsius had to quickly realize that there was no liquidity available for customer withdrawals. The rest is history.

3AC was not spared by the bad news either. The hedge fund had invested a lot of capital in the Luna ecosystem – last month a position on BlockFi was liquidated because the loan could not be repaid. Result: Bankruptcy under American law.

To top it all off, even Voyager Digital filed for bankruptcy a few days ago. Mutual claims with Alameda Research, the investment firm of Sam Bankman-Fried, worth $450 million are at stake.

The moral of the story: The bankrupt companies are all companies from the “centralized finance” sector. Although protocols such as MakerDAO, Aave or Balancer have lost their market capitalization, they are still performing splendidly. Probably, these will generate even more fees as a result of the numerous liquidations than before.

So when is the crypto winter over, we wonder?

To be honest: we don’t know! Analysts expect further price fluctuations due to the difficult macropolitical situation. In any case, buying tokens has never been as easy as it is now. Sign up, verify, get started – it’s easy! Just don’t forget to HODLN.

The Apollo XI VR Experience, from the creator of Titans of Space

Crypto News: the most important events of the week

Crypto Attacks from North Korea – No End in Sight