Haptic VR: the coolest products to experience in VR

The perfect multi-sensory immersion — the dream of every player, and virtual reality offers developers hardware and software new possibilities to this ideal. In the audiovisual field, they are already very close to it. However, the smell or taste still a vision for the future with a few niche products.

When it comes to new ways of perception of our senses, currently focuses on the sense of touch. Some haptic devices can certainly shake the market of virtual reality in the coming years.

VR arcades with elaborate installations, of course, is clearly ahead of the home living from the perspective of the feelings, but there are surprisingly a lot of devices that make the virtual world visible in their own four walls. The proposal varies from the usual goods such as gloves and jackets, to extravagant sex dolls.

Many of the projects at present are still prototypes or even concepts. Some only on paper. So soon the list may grow.

Gloves for virtual reality should more accurately convey the movement of our hand in games and apps and even give tactile feedback. One of these is the Dexmo VR glove from Dexta Robotics, a company based in China in 2014.

In the glove Dexmo uses clawed fingers – robots, which are located at the back of the hand and ends at your finger tips. On the one hand, each finger must be precisely defined, on the other hand, the simulated resistance when the user touches a virtual object.

Already have the development kit but the price is revealed only upon request.

The Japanese company Exiii currently working on two tactile VR-products. On the one hand, EXOS Gripper that acts as a glove as a controller replacement. The prototype resembles the two hand puppets, mouth which you can move your fingers. Jamming, you can grab virtual objects.

In addition to gloves you can use EXOS Wrist. It’s a motorized cuff, which is worn on the wrist. Thus, for example, you can simulate the impact of firearms. Both devices currently exist only as prototypes.

In the beginning of 2020 will be released update for tracking Forte Data Glove, which will make it compatible with the Oculus Quest. Controllers Quests are placed on the backs of the gloves.

Glove HaptX is an absolute premium product. As in the case of Dexmo-Glove, sensors HaptX also extend from the back of the hand to fingertips. In addition to this “magnetic flow” glove also has a “smart” fabric, which has microrocket, airbag and the exoskeleton with feedback.

Extensive features already make it clear: the gloves HaptX is not intended for private use. Target group are industry and manufacturing. However, recreational purposes are not excluded, for example, in amusement parks or arcades.

Initially Prime the Haptic gloves from Manus VR was intended for private use. However, this approach has changed, and now this product is primarily targeted at business users. This affects, among other things, on the price. If the first prototypes were still available for less than 300 euros, now the gloves are almost 5000 euros. However, it is possible that one day technology will still be available for private users.

Manus VR Prime is equipped with Haptic sensors on the back side of the brush, and over and under the tips of his fingers. Therefore, any movement or acceleration of the hand must be accurately reproduced in the virtual world. The tactile module is also installed on the back of the hand and sends pulses corresponding sensors.

Technically Manus Haptic VR Prime is a very Mature product. If you are primarily interested in games and applications for virtual reality, not development, you should look for something else.

There are gloves Manus VR in other versions, such as Prime One Manus, Manus Prime XSens and Optitrack Gloves.

Plexus VR Glove already designed more for home use. The design is simple, construction also. Sensors guarantee precise tracking. Read not only fingers, but also individual joints. At each tip of the finger are also five actuators that provide tactile feedback.

In addition, to the rear of the palm can be attached various devices, such as Vive Tracker or Oculus Touch. Plexus accepts orders for the development of models of gloves of the Plexus VR via your website.

The stretching of the skin 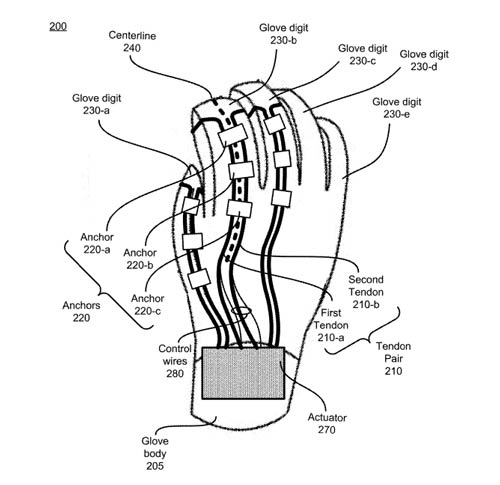 “A tool for stretching leather” — it’s just a patent, registered by Oculus VR. Describes the technology which allows the deformation of fingers be transferred to real objects in the virtual world.

Whether the patent is ever implemented is not clear. But if it comes to that, it is likely to be a kind of glove.

Another haptic VR glove that is also designed for private users is VRgluv . In addition to the required tracking of the fingers this glove also has a exoskeleton for haptic feedback. As a result, the device is quite large and looks almost like a Boxing glove.

VRgluv has a successful Kickstarter campaign. Investors were initially to be provided with a glove to the end of 2017. However, after the transition to mid-2018, the product has still not arrived in the hands of all stakeholders. 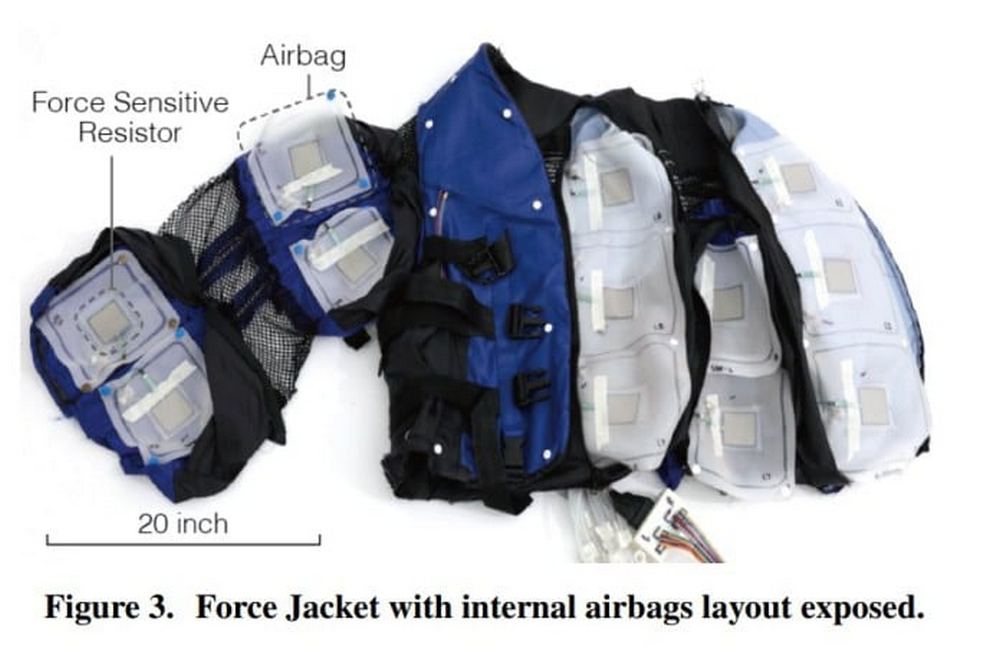 Currently, Disney is working with researchers from the Massachusetts Institute of technology over the vest, which in the future may find application in amusement parks. Jacket (jacket) has 26 cameras that can be quickly filled with air with a compressor.

Together with high-frequency vibrations on the body to develop sensory perception. However, the project is still at an early stage of development. 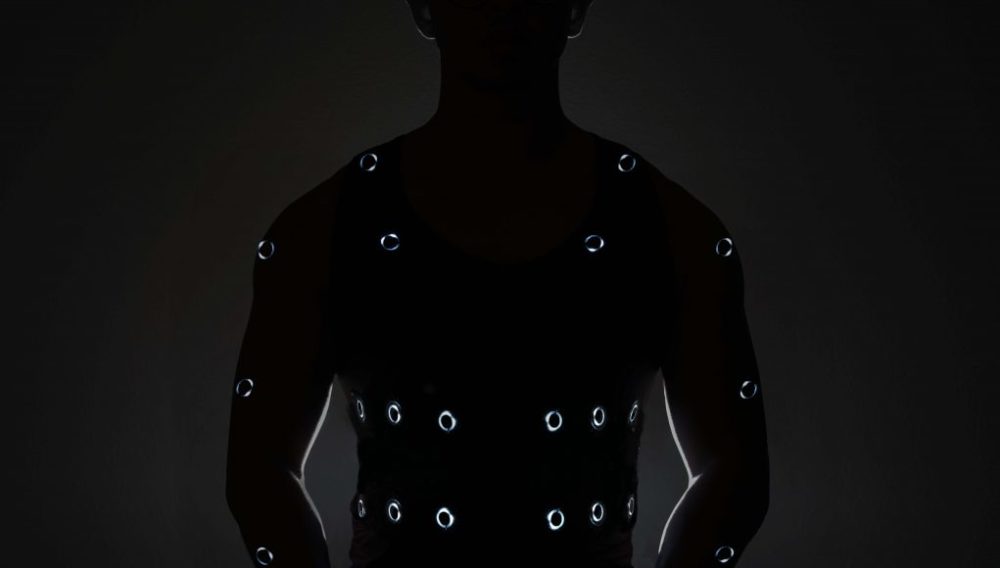 Exoskin is a kind of capsule in which sensors are used to transmit tactile perception to the user in real-time. The VR platform High Fidelity is responsible for an ambitious product, in cooperation with the manufacturer of the Neo Sensory technologies.

In addition to haptic feedback, which is caused, for example, the virtual explosions and the rain suit needs to give the user a sixth sense. For example, the approaching enemies in a video game cause vibrations that warn the player. Approximately 400 Euro jacket Exoskin must also be suitable for ordinary users.

HoloSuit is set as the body of the suit and provides tactile feedback in different locations. Product Kaaya Tech also successfully funded on Kickstarter. Possible applications on the website include games, education , medicine and training for industrial workers.

Woojer Edge is a tactile vest developed for the perception of entertainment, such as games, movies and music. Vibration can be caused by the sound (the pitch of the sound determines the intensity) or specially programmed. In the latest version, which, for example, makes a noticeable impact at the appropriate point of the body, the developers have to program each pulse individually.

This technology can be purchased either in the form of a vest (with six vibration speakers), or in the form of a belt on the chest or thigh (speaker). If you want to use Woojer Edge in combination with the VR glasses , you need headphones.

On Kickstarter, the developers managed to collect more than $ 1.9 million . With a price of 270 euros this technology is relatively affordable and designed for the market of ordinary users.

Teslasuit — one multifunction suit for the body. Tactile feedback should not be limited to vibration, which specifically stimulates the nerves in the body. Even temperature variations in the range of 20 to 40 degrees Celsius become a reality with Teslasuit.

For example, if the user runs through the desert in the game, it gets hot if it is in the mountains, it becomes cooler. In addition, Teslasuit can also be used to capture motion and thus moves the entire body in the digital world.

This suit has 46 tactile stimulation points, 14 sensors, motion capture, and up to 10 climate control. The price varies depending on equipment from 1350 to 2400 euros.

CLAW is currently being developed by Microsoft. The product is a tactile controller for VR applications. But he only puts pressure on the fingertips. However, according to Microsoft, the immersion experience needs to be improved with its help.

In addition to resistance, for example, when removing a firearm to feel realistic, you can even simulate the surface of the affected objects. The stone should be rough smooth window. CLAW currently exists only as a prototype in the labs of Microsoft.

Researchers from the University of Technology of Lausanne in Switzerland have developed a synthetic skin that can simulate touch using compressed air. This allows you to create a grid of small air bubbles, which is located between two thin silicon membranes. The software sends the appropriate signals to the artificial skin, which increases or decreases the amount of air bubbles.

Leather it is theoretically possible to produce an entire clothing. Will the technology ever launched as a product, is still unknown.

Researchers from the same University of Lausanne produced another invention in the field of haptics. The trick is to stimulate our skin, they act directly on the brain.

Use a so-called rubber hand illusion . It describes a phenomenon that we believe is wrong, if we do not see clearly that this is not your own hand. Subjects stimulated certain areas of the brain in virtual reality. Obviously, the majority of the subjects for a short time, I felt that digital hands belong to them.

Haptic Links — this is another prototype of Microsoft. The controller needs to solve a specific problem: if we keep the virtual object in both hands with two motion controllers, we still can freely move them. For example, if the user sits behind the wheel or holding a rifle.

Tactile units solve this problem by creating a dynamic connector, which becomes static as soon as the two hands holding the same object. This gives the user the sensation of having a hard object in front of him or in his hands.

STRATOS — another ambitious technology, specific application areas where VR is still not disclosed. It is a device that generates a feeling of air resistance with the help of ultrasonic waves. From the point of view of immersion, of course, it’s great because there’s nothing else to wear on the body.

STRATOS, however, is more suitable for use on computer — this is a classic seat without heavy traffic into VR, because otherwise the generated field would have to adapt to the position and movement of the user.

Russia's first study on the implementation of CJM-practices in retail

Shopping in virtual malls is gaining in importance

Vive Wireless is delayed to October 8 in Europe