San Francisco The world’s most valuable chip company, Nvidia, is feeling the slump in the global chip industry. Sales in the past three months fell by 19 percent compared to the previous quarter to $ 6.7 billion, as CEO Jensen Huang said at the presentation of the figures on Wednesday. Two weeks ago, the company had already issued a profit warning. Nvidia reported net profit of around $ 1.3 billion for the past quarter. This was around 62 percent less than in the previous quarter.

There is no improvement in sight in the short term. For the current quarter, Huang expected a further slump in sales to $ 5.9 billion. Analysts, on the other hand, had expected revenue of $6.95 billion.

Nvidia’s shares fell by around five percent after the stock market in the meantime. Since the beginning of the year, the securities had already declined by more than 40 percent. The whole industry is suffering. The Philadelphia Semiconductor index of the most important semiconductor suppliers listed in the USA has fallen by almost 30 percent since the beginning of the year.

In the future, Huang wants to focus his company on stronger growth in other industries. Nvidia has high hopes for the automotive sector in particular. “The automotive industry is evolving into the technology industry and is well on its way to becoming our next billion dollar business,” Huang said.

Important partners of Nvidia also include car manufacturers in Germany. Nvidia has been working with Mercedes for several years on solutions for self-driving cars. Year-on-year, sales of chips for the automotive industry at Nvidia increased by 45 percent. However, with $220 million in the past quarter, sales in the area accounted for only a small part of the company’s overall business. The situation is different with the chip business for large data centers. There, Nvidia recorded an annual growth of 61 percent to $ 3.8 billion.

Nvidia, like other companies in the chip industry, had benefited greatly from a boom over the past two years. Today, chips are installed in almost all electronic devices. Disruptions in the supply chains had forced, among other things, carmakers to temporarily reduce or even stop their production. In response, the prices of chips had risen sharply and several companies had placed large orders for chip purchases.

The situation is now relaxing. This affects the business of Nvidia and other chip companies. Nvidia announced that it had accumulated inventories with a total value of $ 3.9 billion at the end of the last quarter. In the same period of the previous year, inventories stood at a value of $ 2.1 billion.

Huang announced that he would reduce prices in individual areas in order to relieve the backlog between chip production and chip sales. “I think by the end of the year the situation will ease,” he said. 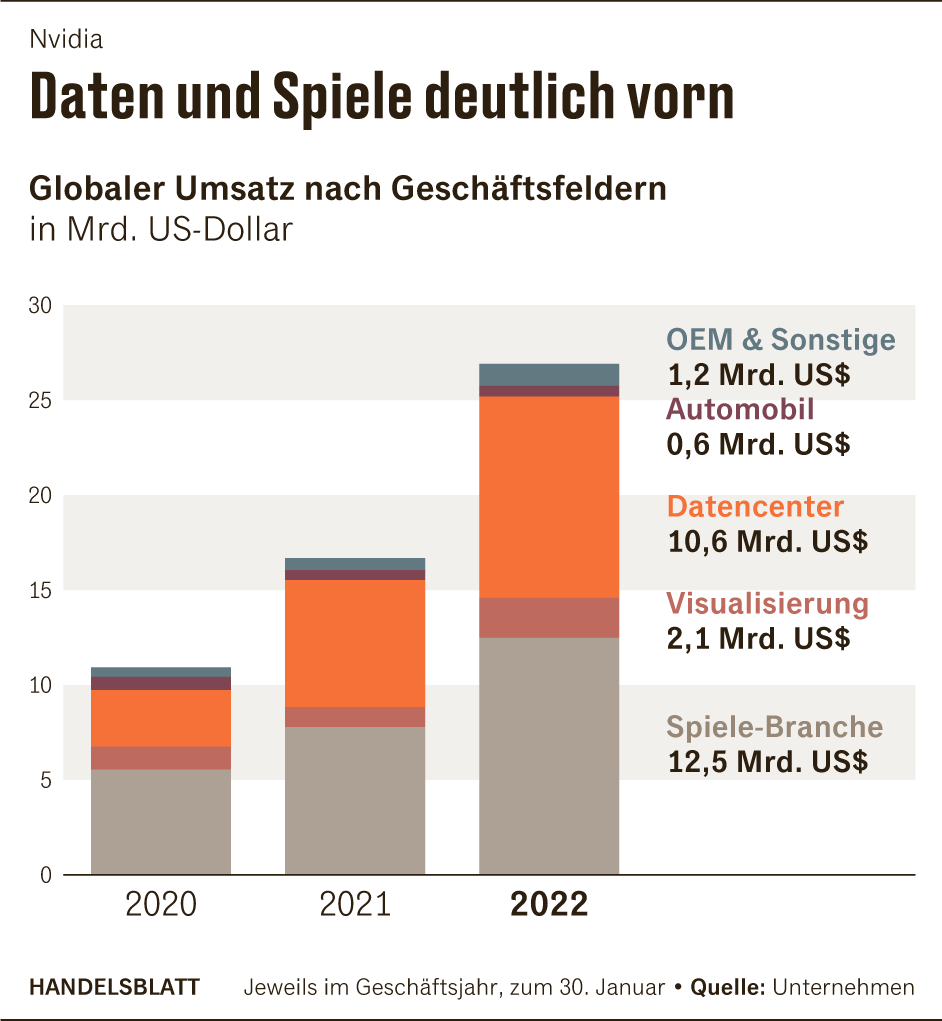 At the same time, Huang expressed confidence that new generations of chips will stimulate demand for Nvidia products. “Our new Hopper architecture will make completely new applications in the field of artificial intelligence possible,” he promised.

Nvidia announced the computing accelerator in March. It should offer 80 billion transistors on more than eight square centimeters of silicon area and thus be significantly more powerful than previous architectures. The accelerator is named after the American mathematician and computer scientist Grace Hopper.

Nvidia was founded in 1993 by Jensen Huang as a company with a focus on high-performance graphics chips. In contrast to the previously dominant computer chips, which could be used for almost all applications, Huang optimized his company’s chips for special graphics applications and was thus able to offer significantly higher performance. Most recently, Nvidia has optimized its specialized chips for the performance of large data centers and tailored them to artificial intelligence solutions, among other things. Nvidia is considered a leader in this field.

In addition to Nvidia, the fourth largest semiconductor manufacturer in the world, Micron, also issued a profit warning two weeks ago. Chip giant Intel could also feel the effects. Analyst Stacy Rasgon of investment bank Bernstein predicted that the industry could suffer for a long time.

Revenues of US$260 million achieved

Revenues of US$260 million achieved

Amazon increases the price of a Prime subscription in Germany