Munich, Beijing The order books at ASML are full: in the second quarter, the chip manufacturers ordered equipment worth 8.5 billion euros from the Dutch mechanical engineering company. Chief Executive Peter Wennink said this Wednesday: “A new record. We do not see any diminishing demand.“

Nevertheless, investors are nervous: on Wednesday morning, the share price in Amsterdam plunged by up to four percent at the start of trading. Over the course of the day, however, the price rose to the highest value in a month, to almost 490 euros.

The reason for the uncertainty: CEO Wennink halved the sales forecast for 2022. Revenues would only increase by ten percent. Wennink explained: ASML delivers the chip machines to the buyers faster than in the past in order to meet the high demand. The final acceptance is now taking place in the factories. Therefore, the sales would be recorded later.

Since the beginning of the year, securities have already fallen by almost a third, which is not only due to the new accounting practice. Rather, ASML is increasingly threatening to feel the consequences of world politics.

Europe’s most valuable tech group could be doomed by its success. Semiconductors are in short supply, and chipmakers are building more new factories worldwide than ever before. Only ASML has mastered the so-called EUV lithography, the most advanced production process in the industry.

The flip side of the technological top position: the US and China are fighting more and more fiercely over ASML. Part of the turnover could break away in the long term because of the confrontation of the superpowers.

>> Read here: Cars, Thermomix and fans – there is no end to the chip shortage

The US is pushing the Netherlands to extend the export ban on high-tech machines for the production of semiconductors. This is reported by the financial information service Bloomberg. ASML is already not allowed to supply EUV machines to China, which cost up to 160 million euros per piece. They are covered by the Wassenaar Arrangement between 42 countries, including the Netherlands. It stipulates that the export of technology with simultaneous military and civilian use must be approved by the government.

If it goes to the USA, the sale of systems with simpler technology, so-called DUV systems, to the People’s Republic will also be prohibited in the future. U.S. security advisers have been pushing for some time that America should maintain a good two-chip generation lead over China.

With this, the government of Joe Biden continues what the previous US President Donald Trump began. In 2018, the Republican intervened with Dutch Prime Minister Mark Rutte to deny a license for the export of an EUV machine to the Chinese chip manufacturer SMIC. Trump apparently had success: the equipment never reached China. 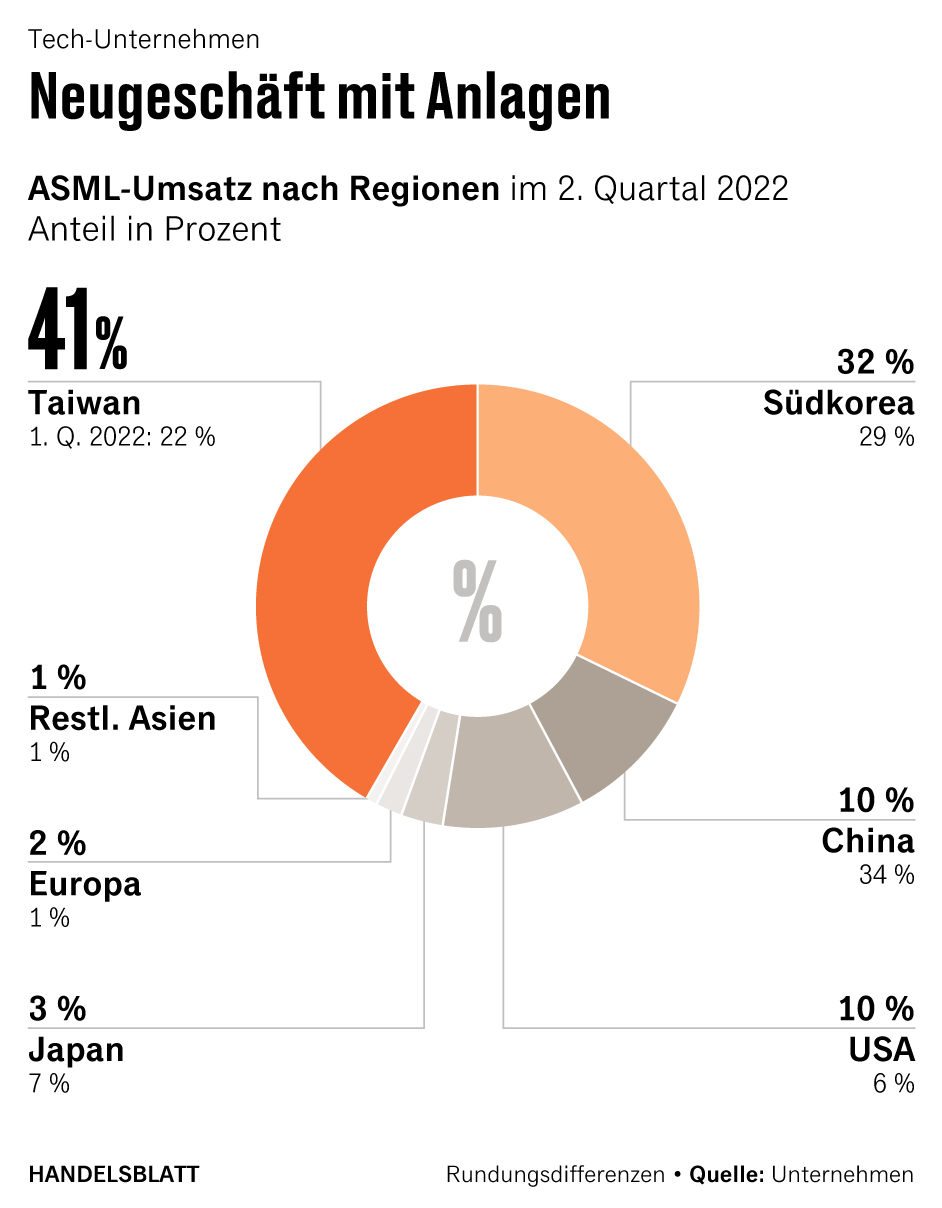 An export ban on DUV machines would hit ASML harder than the EUV ban. New business in China would come to a standstill. In the just completed second quarter, the Group generated only ten percent of sales in the People’s Republic with machine sales. In the first quarter, however, it was still 34 percent. Last year, ASML generated sales of 2.7 billion euros in China, which corresponds to 14.5 percent of all revenues.

A spokesman for the Chinese Foreign Ministry described the US attempt as “tech terrorism”. This will make it clear to all countries what the risk of technological dependence on the United States is, and prompt them to become “independent and self-sufficient” faster.

China is the largest customer for semiconductors worldwide. For years, the state and companies have been investing billions in research and development in order to become more independent of imports. It is estimated that over the past ten years, $ 170 billion in subsidies have flowed to promote the industry. US sanctions are already preventing the sale of chips to Chinese tech companies such as Huawei, Hikvision, Semiconductor Manufacturing International (SMIC) or ZTE.

China is dependent on modern machines

In order to catch up technologically, Chinese chip manufacturers are dependent on access to modern machines. US chip suppliers such as Applied Materials and Lam Research are already no longer allowed to sell certain products to SMIC, the largest Chinese manufacturer. Now the requirements for ASML and Nikon from Japan are to be increased.

According to estimates by Bloomberg analysts Masahiro Wakasugi and Brian Moran, ASML’s sales could fall by five to ten percent if the sale of the DUV lithography systems is prohibited.

At the moment, ASML could still cope with the failure of China. Chief Executive Wennink said: “Demand is significantly greater than our capacities.“ ASML has orders in excess of 33 billion euros on its books. For comparison, Wennink expects sales of 20.5 billion euros for the current year.

Customers will have to wait more than two years

The business with chip machines will grow by almost a fifth this year to 129 billion dollars, predicts the market researcher Counterpoint. Last year, revenues soared by a third.

It is not clear how long the good order situation will last. The world’s largest contract manufacturer TSMC recently announced that it will spend only $ 40 billion on new machines and plants this year. Previously, the Taiwanese had envisaged up to 44 billion.

However, the fact that the individual world regions are decoupling from each other could also have advantages for ASML, Wennink pointed out: “Technological sovereignty ensures large investments and subsidies.” America, the EU and Japan support the settlement of chip giants such as Intel, TSMC, Samsung and Globalfoundries with billions.

Successfully through the bear market with the right tools

Has the Bitcoin price reached its low point? This is what Grayscale’s report says

Has the Bitcoin price reached its low point? This is what Grayscale's report says

PlayStation Spain: “We are confident that we will reach and exceed the (sales) target we have for this year”