Company Snap on Monday added a new tab in the Spotlight in your app, which will allow users to watch popular short video and monetize the video by analogy with the functions of TikTok and Instagram Reels. 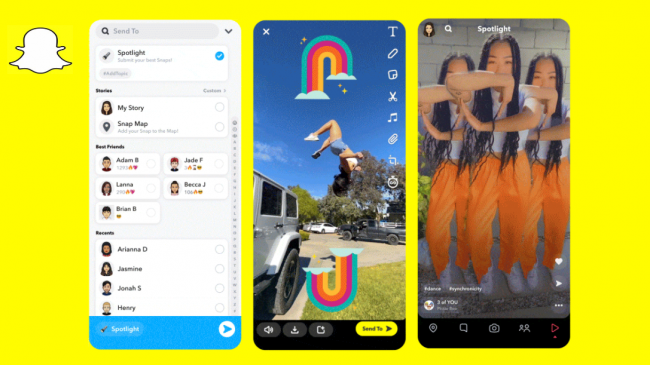 The company’s shares Snap (SNAP), increased by 177% since the beginning of the year, rose 2.2% on Monday amid news of the launch of the new feature Spotlight videos to its app Snapchat.

To motivate the users and creators of the video, the Snap company said it will pay the creators of the best videos every day for $1 million, which will be distributed depending on the number of views.

The content should not contain policies and misinformation, does not allow public comments, and the age of the Creator of the video (60 seconds) must be at least 16 years of age. Creators can open their accounts at the request or do not specify the descriptor Creator that other users couldn’t email them.

“We have developed a Spotlight to entertain our community through the values of Snapchat, the well-being of our community is a top priority,” – said in a statement Snap.

According to a press release from the company: “Spotlight available since the USA, Canada, Australia, New Zealand, UK, Ireland, Norway, Sweden, Denmark, Germany and France, and soon will appear and in other countries.”

Spotlight will be a new tab to encourage users to see public content from the most interesting videos created by the Snapchat community. Before this application included the Discover tab to search for videos, but users are limited to viewing pictures posted by their friends.

During the initial launch of Spotlight will not be advertising, but a company representative said that Snap is planning its launch in the coming months.

The Spotlight feature is similar to what’s popular among young people, the TikTok app, and run it in Snapchat logical, as many users shoot video with masks and unique features augmented reality Snapchat, before you export, and publish it TikTok.

The company Snap focuses on the fact that its principles work concentrated on the avoidance of serious disputes, the prevention of dissemination of false or misleading information, hostility or malicious content. This year the world’s largest social. network Facebook suffered from these problems, having lost some big advertisers.

Last week, Loop Capital Markets analyst Rob Sanderson said that if Snap will follow the examples of monetization of Facebook, the company can reach an estimate of $200 billion in five years, while the market capitalization of Snap was $64,4 as of Monday.

Watch the best State of Play ads for September 2022

HTC prepares a new application inspired by Ready Player One