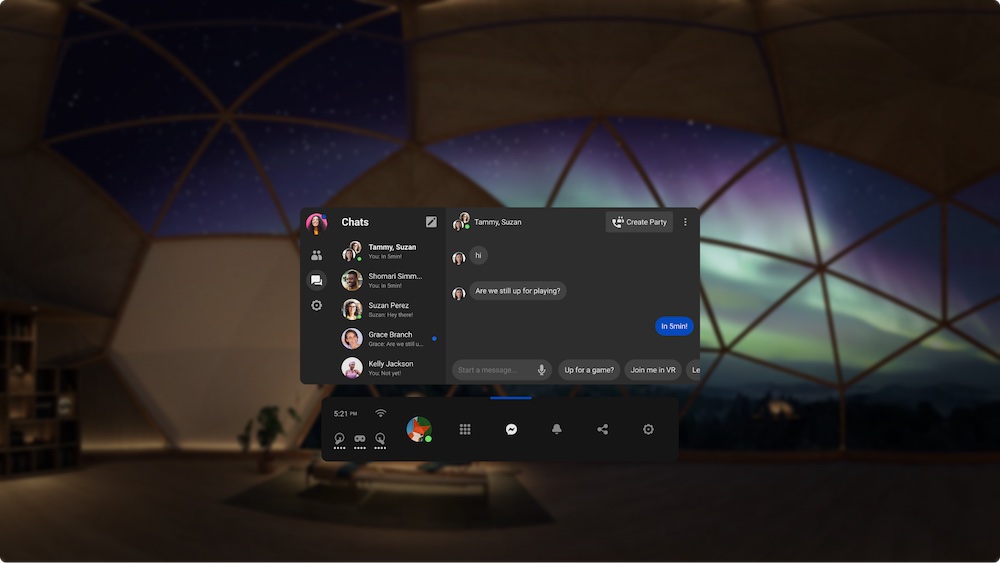 Update 25 for the Oculus Quest comes with the beginning of this week. What new features and improvements come with him?

The most important new feature is the access App Lab. New distribution channel Quest offers users the ability to set an experimental application on the Oculus Quest without downloading.

The integration of the messaging application Facebook Messenger offers a new way of communication with the outside world. Anyone who walked into your Oculus Quest or Oculus Quest 2 with their account in Facebook, can now chat in virtual reality with friends and family members who are also using Messenger.

Quest users can choose from ready-made snippets of the conversation, typing with the virtual keyboard or use voice recognition. The last function is presumably available to users from North America.

In addition, you can invite friends into the current VR games via Messenger or send a group invitation to start the game.

Identity Oculus and Facebook remain separate, so you can write the Oculus friends without revealing your identity. If you want someone to lend your Quest, you can sign out of messenger in glasses of virtual reality.

Integration with Messenger will be deployed for users of Quest in the next few weeks. So it will take some time before it reaches all users. More information on how this works can be found in the official FAQ.

Improvement of the system is Guardian and the universal menu

In addition to Lab App and Messenger, Update 25 contains a number of other features and improvements for Oculus Quest (2).

Facebook has improved the stationary regime Guardian, who now works without annoying mesh, and activating the end-to-end mode by double-tapping the side points VR is now a standard feature.

Universal menu became more compact and easier to use, and it can access all VR applications. However the new feature is still experimental and needs to be activated in the settings.

VR-profiles of other users of the Oculus can now be viewed from the comfort of a running app, VR and easier to chat with friends on Facebook. Those who love to record a video, you can edit their length in VR before publication.

Oculus browser now allows you to adjust the size of the window horizontally by using the capture button or trigger. You can open up to three browser Windows simultaneously and individually change their size. If you prefer to surf the Internet with the mouse and not the Oculus Touch, you can now connect a bluetooth mouse to Oculus Quest (2). This feature is still experimental.

Facebook has also modified the link Oculus Link with PC: now you can stream VR apps with a frequency of 80 and 90 Hz with a USB cable-2.

The update lacks multiplayer and account sharing app, announced on Feb. Most likely, they will appear in the next update. John Carmack announced more frequent updates Quest in the future.

Full list of all the new features and enhancements in Update 25 can be found in the release notes Oculus.

Yahoo! will never be the same