The diamond looks rather inconspicuous from the outside. Simple functional building, hardly any windows, crammed with servers inside. It is a typical datacenter of Datacenter One. According to financial circles, the company is for sale under the code name “Project Diamond”. Demand is high, especially from financial investors.

Whether “Project Diamant” or other deals: private equity companies are currently competing for the operators of data centers. “The data center industry has become a magnet for private equity and infrastructure funds, driven in particular by strong demand growth for computing capacity and attractive returns,” says Matthias Sahm of investment bank Morgan Stanley. Both the number of transactions and the deal volume have recently increased sharply, says Birger Berendes of Bank of America. “In the first half of 2022, around 40 billion US dollars in data center transactions were announced or completed,” says Berendes.

According to market researcher Synergy Research, it is becoming apparent that the record level of the previous year will be reached in 2022. And this is despite the fact that economic uncertainty is currently making many lenders cautious, as chief analyst John Dinsdale told Handelsblatt.

The interest results from a comprehensible calculation: data centers are the backbone of the digital infrastructure. In the age of streaming and online dating, autonomous driving and Industry 4.0, operators can hope for stable returns. For the investment industry, this means that there are attractive, because long-term investments with predictable, contract-based income.

By the end of August, Synergy Research had 125 deals in the data center industry worth $29 billion. Another 19 with a volume of $ 16.2 billion have already been announced, but have not yet been completed. In addition, there are always – mostly smaller – transactions without long notice. Last year, the deals totaled $48.9 billion.

Investment companies have become major funders in these deals. While the share of investments in the period from 2015 to 2018 was still at 42 percent, in the first half of the year it was more than 90 percent, as Synergy Research has determined.

A typical example: the data center operator Switch has acquired the competitor Digital Bridge Group for eleven billion dollars – with the support of the Australian pension fund IFM Investors, which is also working with Deutsche Telekom on the fiber optic expansion.

In Germany, the deals are smaller, but not necessarily less attractive. At Datacenter One, private equity owner Star Capital has entered a handful of bidders into the final round, according to several people familiar with the matter. Only those who offered more than 300 million euros advanced.

According to the seller, the company should achieve an operating result (Ebitda) of 15 million euros in 2023, but according to the estimates of bidders, it should be significantly less. The valuation is therefore at least twenty times the Ebitda, which testifies to the attractiveness.

Other deals in the telecommunications sector, such as for fiber-optic or mobile towers, achieve lower valuations on average. However, it is unclear how quickly the transaction will be completed. Currently, the reviews of sellers and possible buyers are still at odds.

Datacenter One is not the only data center provider currently on the market in Germany. Under the project name “Falke”, investor Emeram Capital is currently offering the data centers of its digitization company Diva-E, which are running under the name First Colo. Star Capital and Emeram declined to comment.

According to financial circles, three bidders had made it to the last round, one has already been selected for exclusive talks. A purchase agreement could be signed by the end of the month, whereby the company could be valued at almost 150 million euros.

At the beginning of the month, the investors Digital Transformation Capital Partners (DTCP) and Art-Invest Real Estate had acquired a majority stake in the Frankfurt data center operator Maincubes and announced investments of more than one billion euros over the next few years. “The European data center market is currently dominated by providers from the USA and Asia,” explained DTCP partner Waldemar Maurer. Maincubes has the potential to establish himself as a leading European player.

Other deals in recent months have included the purchase of Akquinet in the spring by Deutsche Beteiligungs AG and the acquisition of Block a year ago.one data centers by Northern Data for 365 million euros.

Data volume will triple by 2025

The trend is not likely to stop so quickly. As a result of the digital transformation, companies have to process ever larger amounts of data – whether for social media or online shops, the control of logistics chains or the training of algorithms. Market researcher IDC estimates that the volume will almost triple in the period from 2020 to 2025. “A lot of money has been raised for investments in the industry, the takeover targets are few and far between,” says a consultant focused on the industry. That drives up prices.

In short: not much is possible without data centers today, they are the factories of the digital age. 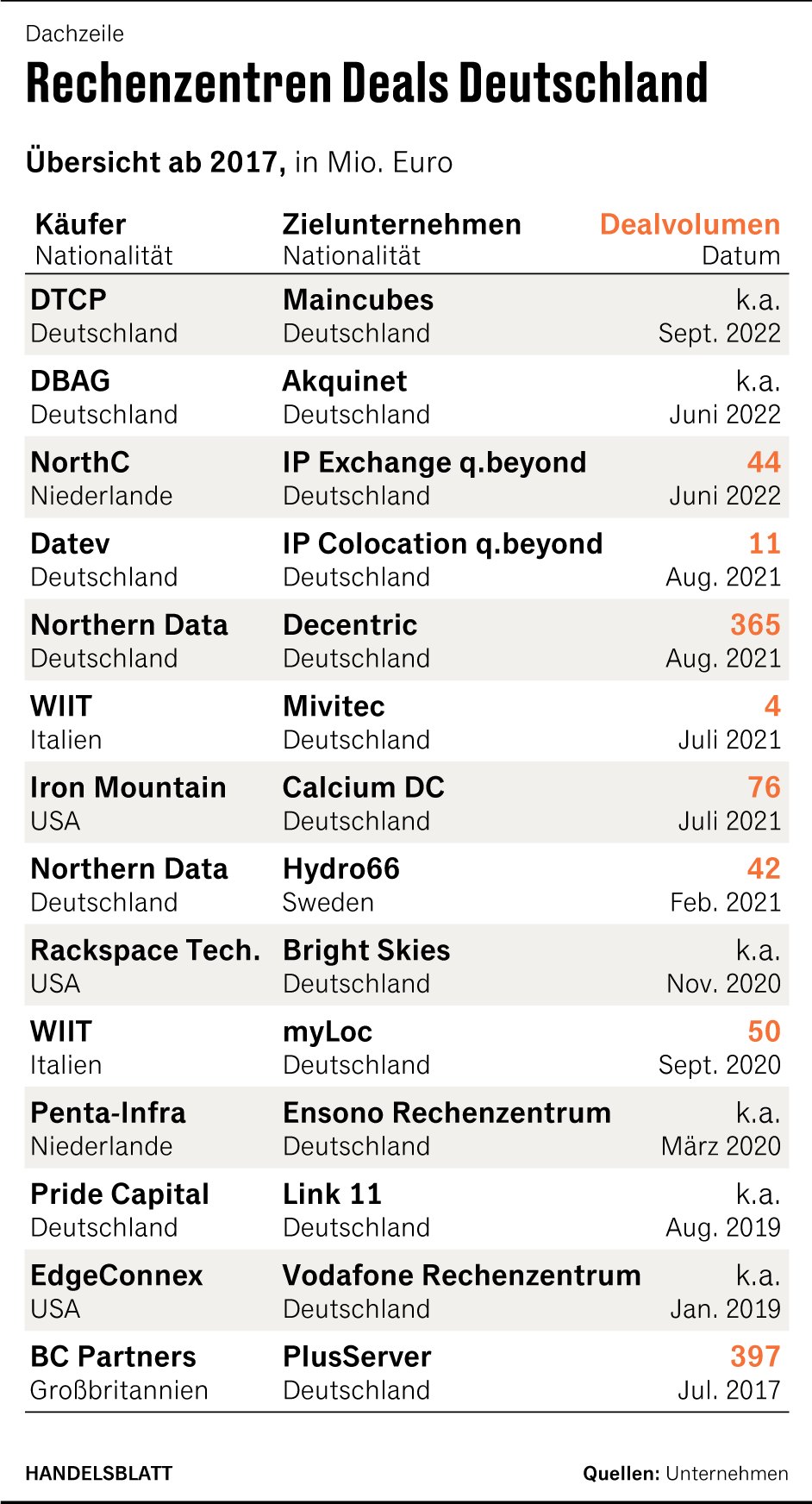 Various business models have established themselves in the industry – from renting a parking space in a hall with electricity, cooling and security, called “colocation”, to providing storage, computing power and other cloud services to corporations such as Amazon Web Services (AWS), Microsoft and Google, called hyperscalers in the industry due to their size.

However, in order to meet the requirements of customers, operators have to invest massively in new sites. Most of them cannot afford the high investments on their own. Even large providers such as Equinix and Digital Realty rely on partners if they do not want to burden their balance sheet too much, says Synergy research analyst Dinsdale.

The private equity companies, on the other hand, hope for long-term and stable returns thanks to multi-year leases. Similar to fiber-optic or mobile networks, by the way, which are also a focus of investment.

Shortseller bets against the trend

All providers are currently investing heavily to expand their network of data centers. The big corporations are particularly contributing to this. Although they build many sites themselves, half of them are rented.

But there are also risks for buyers of data centers, says Malte Abrams of the investment bank Houlihan Lokey. “Investors have to ask themselves what is hosted in the data center and whether this could migrate to the public clouds of the hyperscalers.“

The well-known short-seller Jim Chanos had also recently warned about this. The large cloud companies could increasingly compete with traditional data center operators such as Equinix and Digital Realty Trust with their own construction activities. “The story is that while the cloud is growing, it is its enemy, not its business,” he told the Financial Times. Having to deal with the “three most cruel competitors in the world” is a big problem. It remains to be seen whether the deals will lead to brilliant results as hoped with “Project Diamant”.

Summary: Everything Apple revealed at its September 7th Far Out event

PrioVR will take a look at Lighthouse