The real news is probably the extreme price increases. The iPhone 14 costs a whopping 1000 euros in the basic version in Germany and thus breaks the four-digit sound barrier. The premium version with a particularly large amount of storage space even breaks the mark of 2000 euros for the first time.

When the new model goes on sale on Friday, customers will have to dig deeper into their pockets almost everywhere in the world. In the UK, the basic version is priced by 70 pounds (80 euros), in Germany by 100 euros and in Japan even by 21,000 yen (145 euros).

The only country without a price increase: the USA. There is the iPhone 14 for 799 dollars – the same price as for the entry-level model of the iPhone 13. Prices are not raised in China either.

The reason for this is the strong dollar, which has risen in price by 16 percent against the euro in the past year. For Apple, revenues in Europe are falling on a dollar basis, and the price increases should at least compensate for this. With its strong market position, the iPhone manufacturer can afford this.

A quarter of IT spending is in dollars

This is not only true for Apple. In many areas, the US technology providers are dominant. For example, in the cloud. AWS, the cloud subsidiary of Amazon, Azure from Microsoft and Google Cloud have a global market share of 65 percent.

US companies often bill their services in dollars. Not only oil and natural gas are traded in dollars worldwide, but also information technology: smartphones, semiconductors, software and cloud services. According to industry service Gartner, the global turnover of IT spending on a dollar basis amounts to approximately one trillion dollars.

>> Read about it: Apple takes a radical step with the new iPhones and abolishes slot for SIM cards

Accordingly, IT expenses are becoming more expensive for German companies and consumers. According to Gartner, 161 billion euros will be spent on IT in Germany this year, of which just under a quarter on a dollar basis. “The strong dollar is hitting Germany hard in combination with inflation,” says John-David Lovelock, IT analyst at Gartner.

IT is indispensable for companies

German consumers and companies react differently. According to Gartner, spending on computers, tablets and smartphones is falling. According to the consultancy, spending will fall by almost ten percent to 20.1 billion euros in 2022. Consumers have often bought new devices in the corona pandemic and are now canceling the new purchase – and all around the globe.

The heads of technology at German companies are also “hesitant” about IT spending, as Lovelock says. However, they are subject to other constraints, software and IT are central to every company. “Inflation and exchange rates will not deter companies from their investment plans for 2022,” says Lovelock. “Companies that do not invest in the short term will fall behind in the medium term and risk not being able to survive in the long term.“ 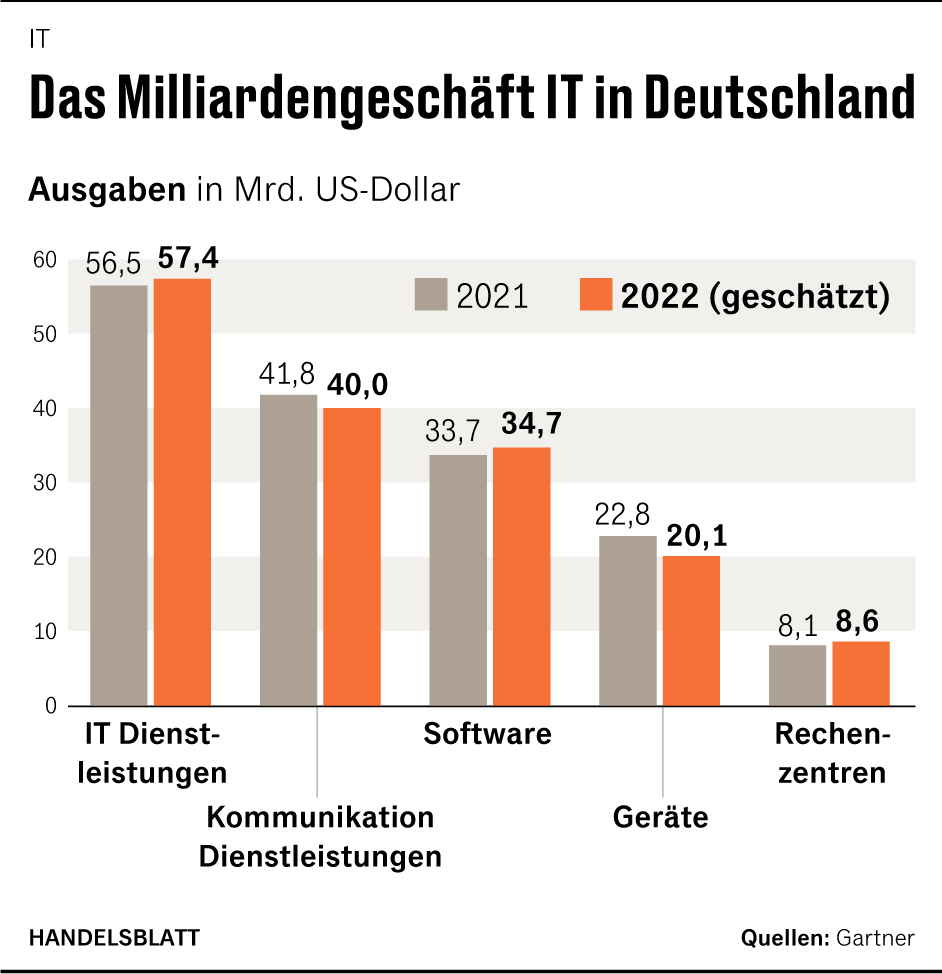 Sebastian Bluhm, founder and Managing Director of the management and technology consultancy Plan D, gives an example: In a pilot project with an insurance group, his company is developing an artificial intelligence (AI) that selects the optimal insurance product for the customer. The program runs on the AWS cloud and trains once a month with about 1.4 million customer data.

In January 2022, the cloud service cost the customer a little more than 3100 euros, in July 2022 it was 3500 euros for the same use. “On a dollar basis, the prices of all major cloud providers have remained the same,” says Bluhm. “But on a euro basis, they have increased by about 16 percent in the past twelve months.“

The customer bears the higher costs without grumbling, Bluhm reports. The project is too important, after all, it is about the important follow-up business with existing customers. In addition, the cloud costs are only a small part of the total cost of the project.

Users of rental platforms such as Grover also have to expect higher prices. The Berlin start-up, which rents computers, laptops and game consoles in addition to smartphones, passes on its higher purchase costs to customers. Nevertheless, Grover manager Achille Mollon does not expect a drop in demand: “Renting is becoming more attractive. If a product is 100 euros more expensive, you only have to pay five euros more rent per month.“

In times of high inflation, this can be coped with. Mollon expects that other US companies with sufficient pricing power will try to imitate Apple. However, falling consumer demand will keep the price jumps in check.

Unlike consumers, companies can at least partially overpower the higher prices. According to the Central Association of the Electrical and Digital Industries, semiconductors worth 15.5 billion euros were imported last year. However, the German electrical and digital industry exported semiconductors worth almost 15 billion euros in the same year – not least driven by the weak euro, which supports sales.

Apple also needs to think about where the group can raise its prices without losing market share. For the group it is clear: not in the USA and China, which together account for about half of iPhone sales. There is no exchange rate effect in America, and China is in a difficult condition with its long lockdowns due to the pandemic and with weak economic growth.

Other laws apply to the rest of the world. Grover manager Mollon attributes Apple’s pricing policy, which is limited to Europe, to the resilience of the local market, which makes it possible to raise prices without dampening demand. In Asia, the US Group is pursuing a more aggressive growth strategy and acting differently in terms of prices.

First reports show that Apple is partly right with the iPhone 14 and the pricing policy. In the US, “demand is strong,” reports Samik Chatterjee, an analyst at JP Morgan, who makes his statements based on the waiting time. In China, on the other hand, the strong demand is limited to iPhone 14 Pro and 14 Pro Max, similar to Germany.

One consolation for German iPhone buyers: in some countries, consumers have to dig much deeper into their pockets. Due to high inflation and other factors, the price in Turkey, for example, doubled. The basic version costs the equivalent of a proud 1680 euros.

Target the right companies based on company data