Walmart teamed up with three manufacturers of drones, launching a test-delivery of tests for coronavirus

Walmart has signed three partnerships in the last month: with Flytrex, Zipline, as well as with Quest Diagnostics and DroneUp, which is testing delivery drones kits for testing COVID-19. The presence of a huge supermarket chain Walmart could be an advantage for his business for the delivery drones to compete with Amazon. 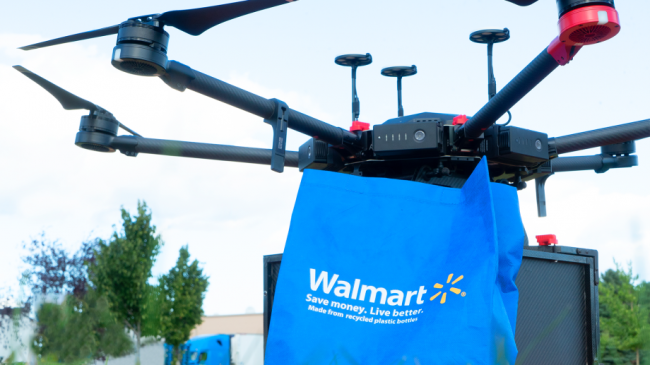 Walmart (WMT) continues to follow cutting-edge technologies in the field of e-Commerce and delivery.

According to the company, drones DroneUp already made 57 flights with an average time of about 10 minutes and delivered to customers 24 test set COVID-19 at home.

31 August, Amazon announced the receipt of permission of the Federal aviation administration (FAA) to operate its fleet of drones to deliver Prime Air. Unlike Amazon, which itself produces drones, Walmart has taken the path of partnerships.

In a press release, Tom ward, senior Vice President of products for customers Walmart wrote: “Many years ago, our founder Sam Walton said, I was always encouraged to resist the system, to innovate, to go beyond what was before. This remains the guiding principle in Walmart today. As a pioneer in the field of universal bar codes and electronic scanning cash registers and ending with work in the field of Autonomous delivery vehicles, we are working to understand how these technologies may affect the future of our business and help us better serve our customers.”

Walmart also noted that the tested drones operate on electricity, which corresponds to the long-term programme of the company to minimize harmful emissions into the atmosphere.

The company considers this type of delivery fast what is a key factor in competition among sellers of e-Commerce. It is also useful as a grocery shopping or small parcels, and medical tests or medical supplies to give the opportunity to buyers to stay at home and reduce the number of contacts potentially sick people.

Tom ward, senior Vice President of Walmart, said that in his opinion, the technology of automatic drones “great potential”.

Ward said that Walmart is testing delivery drones, trying to better understand what consumers want and how much will cost these services. The company gave no estimate of when delivery drones become widely available in the United States. Walmart will have to obtain permission from the authorities and overcome the potential resistance of people who may be considering buzzing delivery vehicles in his back yard as a nuisance or invasion of privacy.

Walmart sees its competitive advantage compared to Amazon, the company United Parcel Service and owned by Alphabet a subsidiary Wing that also have permission from the FAA on delivery drones.

Advantage of Walmart in its vast network, covering more than 5,300 supermarkets throughout the U.S., including stores subsidiary, Sam’s Club. This can simplify and reduce the cost of delivery of goods Walmart using drones than Amazon, which relies on a network of large distribution centres which are usually located far from residential areas.

“Given that 90% of Americans are within 10 miles (16 km) from Walmart, the drone is actually a fantastic solution that provides unique opportunities for success,” said ward.

Vijay Mukherjee, a business Professor at the University of Texas at Dallas, added that such a delivery business can create another stream of income – if Amazon or Walmart will offer drones in service quality to retail competitors or their partners.

New Virtuix is an Omni treadmill VR One for home use

How much space you need to use the Oculus Quest 2