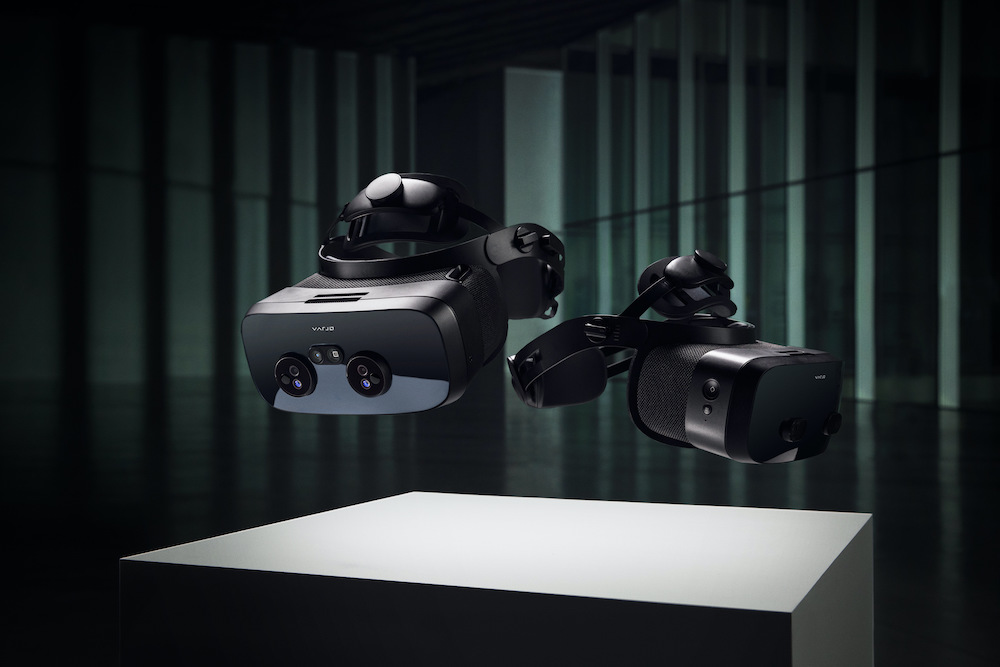 Varjo introduces the third generation of its XR devices. Technical glasses are much more powerful and, at the same time, cheaper than their predecessors.

VR-3 and XR-3 replace the old Varjo devices: VR-3 is now sold instead of VR-2 and VR-2 Pro and XR-3 instead of XR-1 Developer Edition.

The pitfalls of a dual display

The unique advantage of the Varjo glasses is the dual display: it consists of a smaller focal display with a high pixel density above the average, which provides a clear image in the center of the image, and a larger contextual display with standard resolution, which shows the remaining field of view as clearly as standard VR glasses.

This design has two problems: on the one hand, the image is perfectly clear only in the middle on a fairly small area, and on the other hand, the transition from displaying the focus to displaying the context is clearly traced and violates the impression of the image. 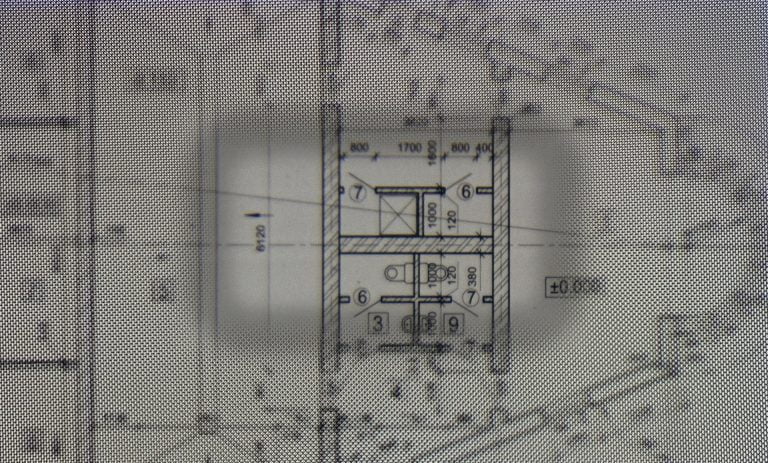 This is how the picture looked in the previous Varjo glasses | / Image: Varjo

In VR-3 and XR-3, Varjo solved these problems: the focus display is now twice as large, and the context display has a much higher resolution. According to Varjo co-founder and current head of innovation Urho Conttori, the transition is almost imperceptible.

The third generation of Varjo devices also offers a larger field of view with a viewing angle of 115 degrees horizontally instead of 87. 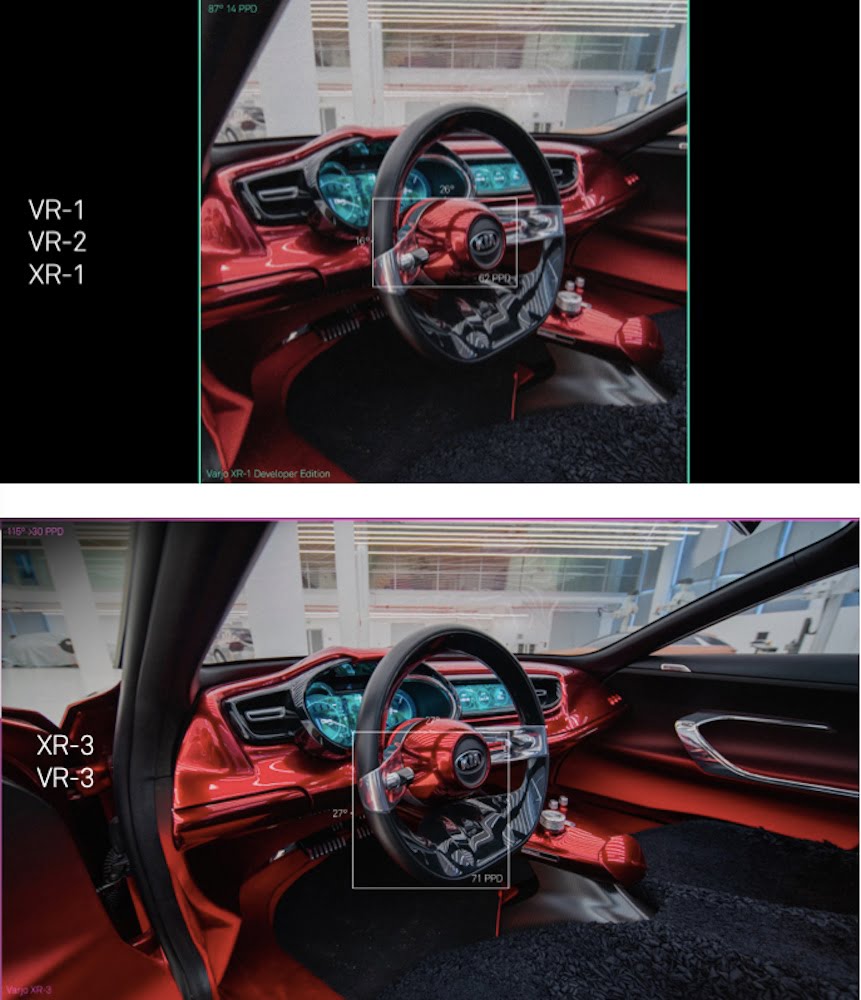 The pixel density of the focal display has also improved | Image: Varjo 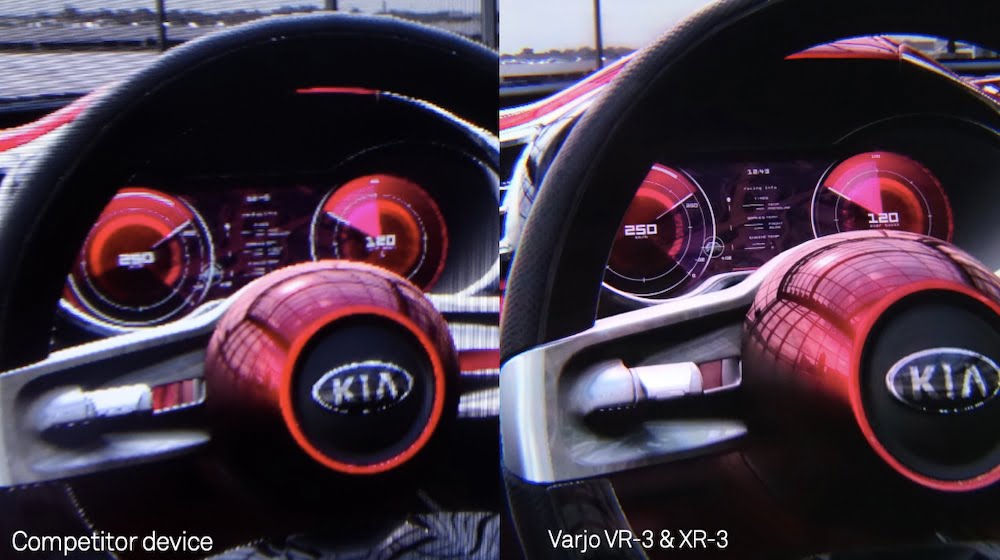 With Varjo glasses, you can see much more details. Professional application scenarios, such as pilot training and virtual reality prototyping, benefit from this. | Image: Varjo

The VR-3 and XR-3 offer gaze tracking and foveal rendering as standard, as well as the latest version of Ultraleap hand tracking. In terms of wearing comfort, Varjo has made a big step forward: the technical glasses are now 40 percent lighter and feature a new, improved head strap that can be adjusted in three places.

The XR-3 also offers an augmented reality mode: two RGB cameras capture the surrounding environment and transmit the image to the glasses, where you can add digital elements. According to Conttori, the camera’s viewing delay is less than 20 milliseconds.

A new feature of the XR-3 is the additional inside-out tracking feature developed by Varjo. Previously, the Varjo and VR-3 devices used SteamVR tracking from Valve. The XR-3 is also the first Varjo glasses with a built-in LiDAR sensor. With its help, technical glasses can recognize, measure and scan the depth of a room at a distance of up to five meters. 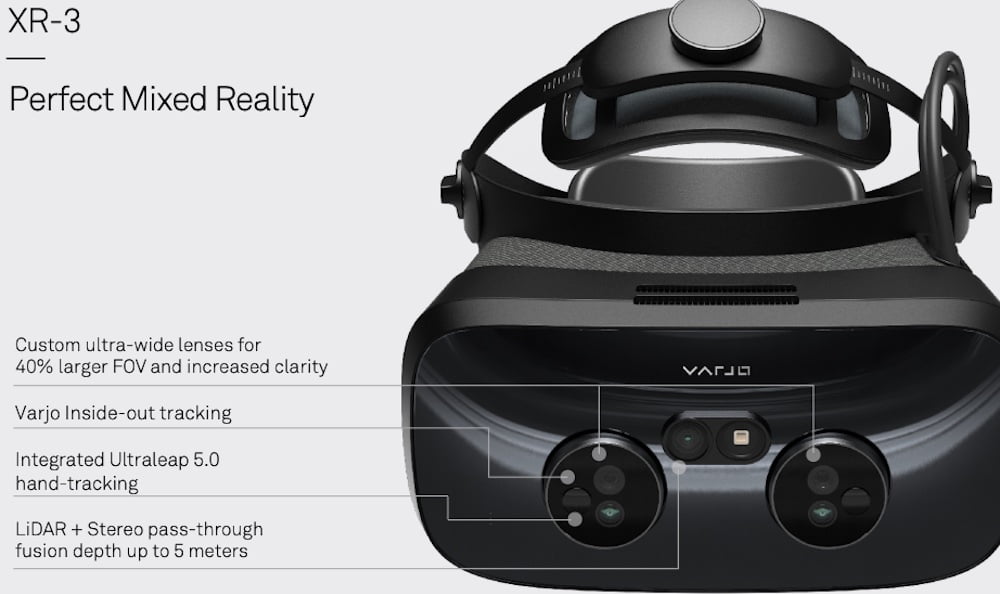 The front panel of the XR-3 has a lot of cameras and sensors built in. | Image: Varjo

The combination of XR-3 sensors in action. On the left: 3D data from LiDAR. In the center: an RGB image. On the right: the resulting detailed three-dimensional map of the depth of the environment. | Image: Varjo

Varjo glasses are now available for small businesses as well

Varjo CEO Niko Aiden spoke earlier about reducing the price of Varjo devices so that they are affordable for small and medium-sized companies.

In the third generation, Varjo fulfills its promise: the XR-3 costs 5495 euros, and Varjo once asked for almost 10,000 euros for the XR-1 Developer Edition. The VR-3 costs 3195 euros, and its predecessors, the VR-2 and VR-2 Pro, cost 4495 and 5995 euros, respectively. As before, there are additional software and support costs.

If the price of Varjos VR glasses drops by another 50 percent in the next few years, this device may be of interest to virtual reality enthusiasts. Conttori emphasizes that the device works without problems with any VR application, including games. However, at the moment, the devices are sold only to companies.

Varjo wireless glasses are in the plans

The hardware requirements are in an acceptable range, despite the high-resolution dual display: Conttori defines the Nvidia RTX 3070 as the basis. Foveal rendering also helps to reduce the requirements for the GPU.

According to the company’s founder, factors such as ergonomics and weight can always be optimized to expand the potential XR market. As for the display, the next big steps will be brightness and HDR playback. In the future, it is also expected that the Varjo glasses will work wirelessly. Varjo is already working on appropriate solutions.

Now companies can order VR-3 and XR-3 on the official website.